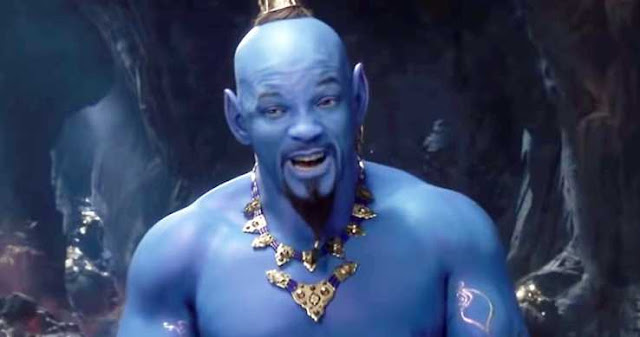 You asked for a blue Genie, well you wish has been granted.

In December, the first look at Guy Ritchie’s live-action Aladdin film honored Entertainment Weekly’s cover, but many fans became very vocal by the very human appearance of Smith’s genie. The actor quickly told fans that he would indeed be blue like the original animated Genie. And now we’ve got our first look at that version of the character, courtesy of the new trailer.

The brief video, which aired tonight during the Grammys, saves the Genie reveal for last, with Aladdin (Mena Massoud) rubbing the lamp and unleashing the figure, whom he apparently has no idea about. “You really don’t know who I am?” asks Genie. “Genie? Wishes? Lamp? None of that ringing a bell?”

Smith shared the trailer on Instagram, writing, “I told y’all I was gon’ be Blue!! Y’all need to trust me more often!”

“I got to do everything I know how to do in this movie,” Smith previously told Entertainment Weekly. “I got to act and it was comedy and beautiful dramatic scenes, I got to sing, I got to rap, I got to dance, I got to do action sequences — it was everything that I’ve trained and learned how to do over the last 30 years of entertainment and I got to it use all in playing the Genie.”

Aladdin comes to theaters on May 24.

Check out the trailer below and let us know in the comments!