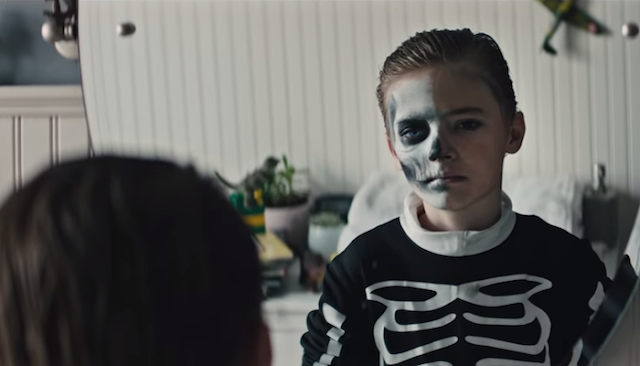 The Prodigy, now playing in theaters, is a brand new horror movie with a bizarre serial killer twist and poor, sweet little Georgie from IT is caught in the middle of it (poor kid can’t catch a break).

Sarah's (Taylor Schilling) young son Miles' (Jackson Robert Scott) disturbing behavior signals that an evil force has overtaken him. Fearing for her family's safety, Sarah must grapple with her maternal instinct to protect Miles in favor of investigating what is causing his dark turn.

Director Nicholas McCarthy is a brilliant director who makes good clean work of the script, leaning into eerie suspenseful silence and dark corners between the films more noticeable scares and being smart in putting faith in Schillings remarkable performance as a devoted mother who is slowly starting to realizing the truth about her son. Scott is just brilliant as Miles, gravitating easily between a sweet innocent kid and evil as the scenes demand. The script was written by Jeff Buhler and is both clever and cliche, using the aspects of the bad seed subgenre in a way the will keep viewers engaged.

Like with most horror films you know what's coming, which is where The Prodigy does some of its best and effective work in drawing in tension. When Miles marches over towards a classmate with a giant wrench in his hand, a nervous chuckle will come out because we know this is going to get ugly fast. And when Miles’ hand creeps down Schilling’s shoulder in a snuggle that is sure to send chills down your spine, we’re cringing just as hard as Schilling because we know what she knows and then some. The script plays its cards early, which works to the film’s advantage, which ends up creating a built-in tension into even the most harmless situations and makes the really insane moments feel brilliant. There some moments that were so shocking the audience let out sounds that were between a scream and a laugh, which pretty much describes the vibe that makes The Prodigy truly entertaining when it wants to be weird and bold.

All of this leads to the big final act showdown leading to a very heartbreaking and effed-up ending. The Prodigy is filled with adrenaline-fueled thrills and unconventional jolts with an ending that could set up a possible sequel should the film do well.

What did you think of The Prodigy? Sound off in the comments!