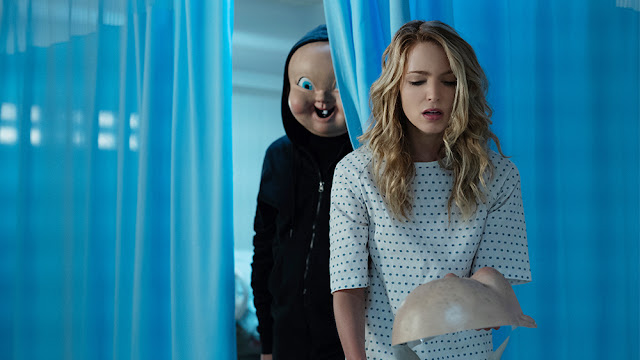 Things get really weird and the stakes are even higher in Happy Death Day 2U, now playing in theaters.

Tree Gelbman (Jessica Rothe) wakes up in horror to learn that she's stuck in a parallel universe. Her boyfriend Carter (Israel Broussard) is now with someone else, and her friends and fellow students seem to be completely different versions of themselves. When Tree discovers that Carter's roommate has been altering time, she finds herself once again the target of a masked killer. When the psychopath starts to go after her inner circle, Tree soon realizes that she must die over and over again to save everyone.

The first film surprisingly won audiences over with its Groundhog Day format to the slasher genre, director/screenwriter Christopher Landon seemed to be shifting the time-loop focus to another character, Ryan Phan (Phi Vu), and continuing to do it with further installments until viewers got bored.

That just didn’t quite happen. The movie adds flips to its loops, incorporating the multiverse theory and alternate realities that sends star Jessica Rothe back into the spotlight. Her mission becomes much more complicated in the sequel, Rothe’s Tree doesn’t just stop killers and decide which universe she wants to be a part of, but she kind of becomes a master in quantum mechanics.

At least the space-time continuum isn’t in danger of collapsing due to the giant machine the film revolves around. It makes for a fun film, and hopefully, 2U will do just fine in the box office so it can deliver more adventures as was teased in the mid-credits scene.

Things start off right where the first film ended, but instead of awakening in the dorm room where Tree is just starting her romance with Carter, we begin in the car Ryan has slept in as to give the two some much-deserved privacy. Ryan then encounters many annoying things that the film loves turning into repeats. Later we see Ryan in a different, more academically filled then the day Tree had over and over again in the last film. We meet his lab partners Samar (Suraj Sharma) and Dre (Sarah Yarkin) working on that giant machine: It generated “0.7 millinewtons of energy yesterday,” they tell him - just so happens this was right around the time Tree got stuck in her time loop.

But, much like the first film, Ryan’s day sadly ends with murder - a person wearing a baby mask chases him and puts a knife through his chest. Then he wakes up in the opening scene again. It doesn’t take long for our heroes to figure out how this is happening: Ryan’s machine created the time loop this has thrown multiple universes off, which you will have to see the film to see how.

Tree had to figure out who her killer was and survive the night in the first film but in the sequel, she has a very different mission - gather data so Ryan can fix his machine and “close the loop” - and a personal one which you will have to see the film to find out.

Overall, Happy Death Day 2U hits its mark and contains enough wit and originality to make do so. Hopefully, a third installment will happen, especially after the mid-credits.