Jessica Jones and The Punisher Cancelled At Netflix 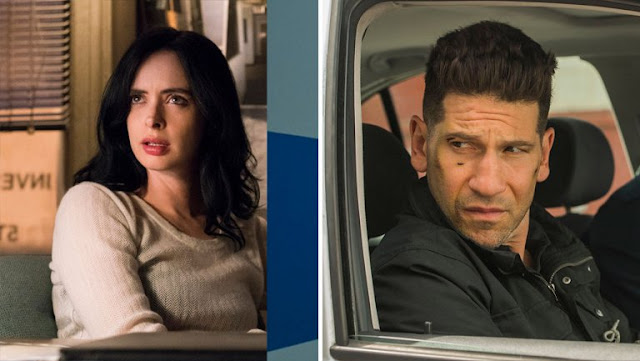 And that marks the end of an era: Netflix has cut ties with Marvel TV by canceling Jessica Jones and The Punisher.

The third season of Jessica Jones, which has finished production, will still air (a date hasn't been set yet), but that will be it for the Marvel shows on Netflix, according to Entertainment Weekly.

"Marvel's The Punisher will not return for a third season on Netflix," the streamer said Monday in a statement. "Showrunner Steve Lightfoot, the terrific crew, and exceptional cast including star Jon Bernthal delivered an acclaimed and compelling series for fans, and we are proud to showcase their work on Netflix for years to come.

"In addition, in reviewing our Marvel programming, we have decided that the upcoming third season will also be the final season for Marvel's Jessica Jones. We are grateful to showrunner Melissa Rosenberg, star Krysten Ritter and the entire cast and crew for three incredible seasons of this groundbreaking series, which was recognized by the Peabody Awards among many others. We are grateful to Marvel for five years of our fruitful partnership and thank the passionate fans who have followed these series from the beginning."

Netflix announced its partnership with Marvel back in 2013 by committing to four ongoing shows plus The Defenders. After Frank Castle (Bernthal) appeared in season two of Daredevil, The Punisher got its own series.

The cuts began back in October with Iron Fist, which was the least liked among the Marvel shows. Luke Cage was axed one week later, and Daredevil was canceled in late November, about six weeks after its third season debuted.

The wave of cancellations comes as Marvel parent company Disney gets ready to launch their Netflix rival streaming service — Disney+ — in late 2019. The new streaming service will feature some of Marvel's biggest box office stars (including Tom Hiddleston) reprising their roles in TV spinoffs, in addition to newly scripted live-action Star Wars series and offshoots of other Disney-owned IP.

The Punisher star Bernthal has said that "there will be more Frank Castle one way or the other," in a reference perhaps to the show's future on Disney+ or seeing the decades-old beloved character best known as The Punisher live on in other forms.

Marvel TV head Jeph Loeb offered something similar in a statement Monday after the cancellations of Jessica Jones and The Punisher.

"On behalf of everyone at Marvel Television, we couldn't be more proud or more grateful to our audience," he said. "Our network partner may have decided they no longer want to continue telling the tales of these great characters — but you know Marvel better than that. As Matthew Murdock's dad once said, 'The measure of a man is not how he gets knocked to the mat, it's how he gets back up.' To be continued."

What do you think about these cancellations, let us know in the comments.