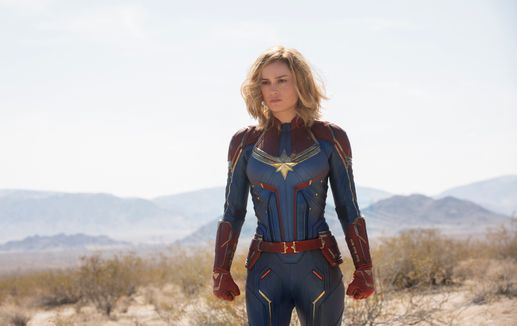 The first clip for Marvel Studios Captain Marvel is here thanks to star Brie Larson!

Brie Larson appeared on this week’s episode of The Ellen DeGeneres Show promoting Captain Marvel and dropped the first clip from the highly anticipated superhero movie on social media late Friday night. Just by the clip, there’s a reason Marvel Studios President Kevin Feige said that Carol, the part-human and part-Kree warrior, is the most powerful character the Marvel Cinematic Universe has introduced so far.

The clip shows a young, CGI Samuel L. Jackson’s Agent Fury and Clark Gregg’s Agent Coulson hustling to keep up with Carol. Suited up in her green uniform for Starforce, the Kree’s warrior special force, Carol is facing off against one of those pesky shape-shifting Skrulls, the aliens who have secretly invaded Earth and disguised themselves among humans.

The film tells the story of Carol, an Air Force pilot whose DNA was spliced together with that of the alien Kree race. When she crash lands on Earth, she has little recollection of her human life. But her human life may help in the battle against the Skrulls.

Check out the clip below!