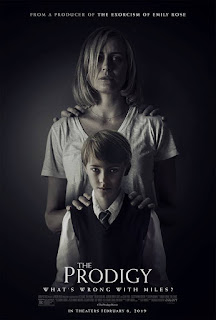 In the new horror film The Prodigy, set to hit theaters Feb. 8, Taylor Schilling (Orange Is The New Black) plays a mother whose young son (Jackson Robert Scott, IT) begins to exhibit disturbing character traits. The movie is written by Jeff Buhler (who’s next project is the upcoming Pet Semetary) and directed by Nicholas McCarthy who’s horror credits include The Pact and At the Devil’s Door.

“When I sat down and read that script, for the first half, I was thinking, ‘Wow, this is really interesting and creepy, and twisted variation on the evil kid subgenre,'” says McCarthy in an interview with Entertainment Weekly. “But then the script just went to this place that I couldn’t believe and that’s what made me go from, ‘Here’s a movie I think might be cool’ to saying, ‘Here’s a movie that’s gotta be made,’ because where Jeff takes the story is truly unexpected.”

Watch the new trailer for The Prodigy, below.