Tom Holland is back in the first trailer for Spider-Man: Far From Home 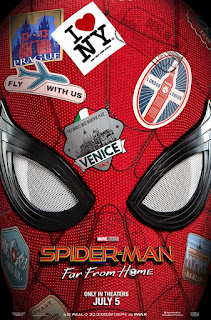 The trailer for the Spider-Man: Homecoming sequel is finally here and this time Spidey is venturing far from home!

The first teaser trailer for Spider-Man: Far From Home reintroduces Tom Holland as everyone’s favorite webslinger. Jon Watts returns to the director’s chair for Far From Home and follows Peter Parker and his friends on a trip to Europe.

In the new film, Peter wants to leave his Spidey suit at home and just have a good time with his pals. “Europe doesn’t really need a friendly neighborhood Spider-Man,” he says. But while he’s abroad he gets a little visit from Samuel L. Jackson’s Nick Fury and, of course, this becomes a not-so-typical vacation.

Marisa Tomei, Zendaya, and Jacob Batalon are all returning for Far From Home (and Michael Keaton’s villainous Vulture might be making another appearance, too). But the film’s main baddie will be the stuntman-turned-criminal Mysterio, played by Jake Gyllenhaal and seen in this trailer warning Peter, “You don’t want any part of this.”

Spider-Man: Far From Home will hit theaters on July 5 — just over two months after Avengers:
Endgame releases on April 26 (which will hopefully explain how Spidey went from being dust to gallivanting around Europe).