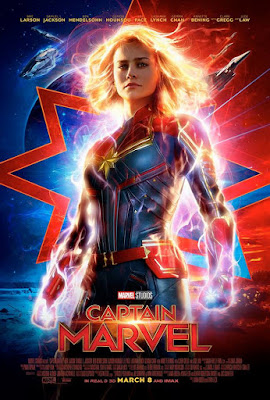 Brie Larson is ready to soar high in the newest trailer for Captain Marvel.


The brand trailer for the highly anticipated new film from Marvel Studios’ debuted tonight during Monday Night Football on ESPN, introducing Larson’s interstellar new hero Carol Danvers. The movie tells the tale of Carol - a part-human, part-alien air Force pilot with extraordinary abilities - as she crashes down on Earth and begins to uncover secrets from her past.

The film takes us back to the mid-’90s, and it also sees the return of Nick Fury (played by a digitally de-aged Samuel L. Jackson). The first words uttered by Fury pretty much sums up the film’s plot by asking Carol, “So, Skrulls are the bad guys? And you’re a Kree, a race of noble warriors?”

“Heroes,” she corrects him. “Noble warrior heroes.”
The brand new trailer also reveals what many had suspected from the first trailer — the old lady Carol punches on the train is actually a Skrull shape-shifter.

But the biggest reveal is an appearance by Annette Bening’s character — whose role has been kept on the down low. The trailer reveals that she’s playing a Kree, one of those aforementioned “noble warrior heroes,” who took Carol in and remade her as a part-Kree, part-human soldier after an injury.

“Your life began the day it nearly ended,” she says. “We found you with no memory. We made you one of us. So you could live longer, stronger, superior. You were reborn.”

As a Kree warrior, Carol is part of an intergalactic military team named Starforce, led by Jude Law’s commander. But memories of her past life as an Air Force pilot — including memories of her old Air Force buddy Maria Rambeau (Lashana Lynch) — keeps breaking through the cracks.


And there’s one more reveal at the end of the trailer: a fluffy orange cat named Goose. In the comics, Carol has a beloved cat named Chewie, and Goose appears to be fulfilling the same role here (while winning over Fury in the process).

Before the trailer launch, Disney also shared a new poster for the film, showing Carol in all her glowing glory. Check out the poster above and watch the brand new trailer below.