New Men in Black: International Trailer is full of action and Chris Hemsworth 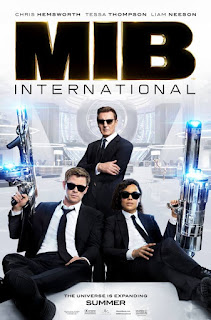 The galaxy’s original defenders are back in black.

The first trailer for the Men in Black spin-off has finally arrived, complete with snazzy black suits, shades, alien weaponry of all shapes and sizes, and even those little, caffeine-addicted Worm Guys.

Stepping into the shoes of the original Men in Black, Will Smith and Tommy Lee Jones, are Chris Hemsworth and Tessa Thompson. (A painting of Jones and Smith’s characters from the first film can be seen hanging in MIB headquarters.) The trailer debuts Thompson’s Agent M, a new recruit for the secretive alien watch group, who, much like Smith in the first film, is introduced to the reality that aliens exist and live on Earth in disguise. Hemsworth stars as the agency’s best operative, taco enthusiast, and M’s new partner, Agent H.

Liam Neeson is the head of London MIB, while Emma Thompson reprises her role as chief of the MIB organization, Agent O. Rebecca Ferguson, Kumail Nanjiani, and Rafe Spall also join the cast as additional characters.

Directed by F. Gary Gray (The Fate of the Furious, Straight Outta Compton), the new Men in Black film will take audiences to the MIB headquarters in London, where a new alien threat requires Agent M and Agent H’s immediate attention.

Over the past couple of months, Hemsworth and Thompson have shared dozens of set photos from their new movie. Hemsworth also posted a behind-the-scenes video to his Instagram Story in between takes, which lives on through Twitter, as captured by users. Hemsworth and Thompson first co-starred in Thor: Ragnarok, and the new trailer gives a subtle homage to Thor in a fight scene involving the Thunder God’s favorite weapon.

The film is currently scheduled for theaters on June 14, 2019, and check out the trailer below.