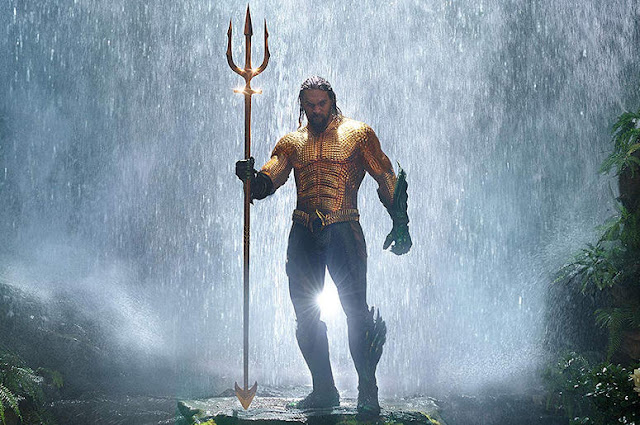 Just like Wonder Woman, Aquaman is a step in the right direction for the Justice League/DC Extended Universe and is now playing in theaters.

Once home to the most advanced civilization on Earth, the city of Atlantis is now an underwater kingdom ruled by the power-hungry King Orm (Patrick Wilson). With a vast army at his disposal, Orm plans to conquer the remaining oceanic people -- and then the surface world. Standing in his way is Arthur Curry aka Aquaman (Jason Mamo), Orm's half-human, half-Atlantean brother and true heir to the throne. With help from royal counselor Vulko (William Defoe) and Mera (Amber Heard), Aquaman must retrieve the legendary Trident of Atlan and embrace his destiny as protector of the deep.

There isn’t a lot that surprised me about Aquaman's storytelling, its execution was quite refreshing. The CGI work was visually stunning, especially during the underwater scenes. Director James Wan does a great job at paying close attention to the stunt coordination and how the action sequences are going to look through so sly camera work including some impressive long-take action scenes that are just long enough not to be overbearing. This helps in keeping the pace flowing smoothly through its runtime of 2 hours and 23 minutes. The romantic aspects of the film have one that comes across as genuine and another that doesn’t quite hit its mark (hopefully it will be fleshed out more in a sequel) but is still fun to watch. Where the villains are concerned, there are several throughout the film but it's Black Manta that feels more of a subplot than a real foe. Luckily, Aquaman’s backstory perfectly blends the past and the present together and doesn’t take up too much of the story.

Nicole Kidman, Patrick Wilson, and William Defoe are perfect in their roles and individually bring more depth to the story. Together, they enhance some of the weaker parts of the film, helps the film overall. The DC Extended Universe hasn’t had the easiest time getting off the ground, but there is a lot of fun to be seen in its latest entry, which greatly due to its charming and charismatic lead. Aquaman wouldn’t work so well it wasn’t for its leading man and no one is more equipped to play the King of the Seven Seas than Jason Mamoa. He completely dominates the screen with his presence and makes his mark on a character who has been the butt of many jokes and makes him undoubtedly cool again. That, mixed with all the amazing action, makes this a must-see movie event this holiday season.