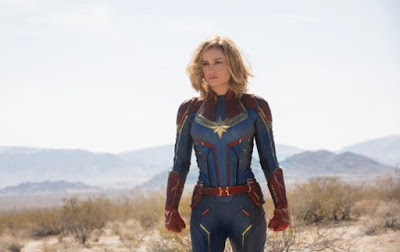 The character was first teased during the post-credits of Avengers: Infinity War when Samuel L. Jackson’s Nick Fury paged her before he turned to dust. But the trailer finally shows Captain Marvel in action — and it’s a powerful introduction to the MCU’s first solo female hero.

The film is directed by Anna Boden and Ryan Fleck (Mississippi Grind) and tells the story of Carol, an Air Force pilot in the ’90s who gains extraordinary powers after she’s infused with Kree alien DNA. When the trailer begins, she is seen crashing on Earth, right in the middle of a Blockbuster. (Wouldn’t be the 90s without good old Blockbuster)

Not long after that, she finds herself face-to-face with a de-aged Nick Fury, who still has both his eyes and is still at the bottom of the food chain at S.H.I.E.L.D. Right away, he can sense that wherever she came from, she’s a fighter. (You even see him use a pager — might even be the one we saw at the end of Infinity War)

“War is a universal language,” he tells her. “I know a renegade soldier when I see one. Never occurred to me that one might come from above.”

The war in question is the one between the Kree and the Skrulls, an intergalactic conflict between two alien races. Jude Law plays the Kree commander of an elite intergalactic military team known as Starforce. The Skrulls are led by Ben Mendelsohn’s Talos, a bright-green creature who uses his shape-shifting abilities to infiltrate Earth.

Carol is a member of Starforce, and there are several shots of the Kree’s home planet, Hala. However, she still finds herself drawn to Earth, even if she can’t remember exactly why. “I keep having these memories,” she says. Flashbacks of her in battle, in training for the Air Force, and as a little girl are then mixed together.

The trailer then moves through a series of scenes, and we get glimpses Carol wearing her iconic helmet from the comics, and Lee Pace’s return as Ronan the Accuser from Guardians of the Galaxy. Plus, we get our first look at a de-aged Clark Gregg as young Phil Coulson!

The trailer then ends with Carol generating a massive amount of energy and warning, “I’m not what you think I am.” Marvel has stated many times that Carol Danvers is the most powerful hero the MCU has ever seen, and this trailer sure looks to be proof of that. Thanos should be afraid, very afraid.

Captain Marvel will hit theaters on March 8, 2019. Check out the trailer below and let us know your thoughts.