Review: Marvel's Ant-Man and the Wasp 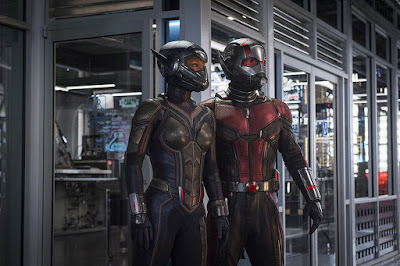 Ant-Man and the Wasp, now playing in theaters, is a hilariously delightful return to the shrinking heroes, with a heartfelt story and sizeable action making it an exciting sequel.

Now we know why Ant-Man wasn’t present during the Avenger’s fight against Thanos in Infinity War. Ant-Man and the Wasp pick up in real time after the events of Captain America: Civil War, with Scott Lang (Paul Rudd) close to completing the two years of house arrest that was part of his deal to get out of prison after violating the Sokovia Accords by helping Steve Rogers. Days before his house arrest is up, Scott is approached by Hope van Dyne (Evangeline Lilly) and Dr. Hank Pym Michael Douglas), Lang must once again don the Ant-Man suit and fight alongside the Wasp. The urgent mission soon leads to secret revelations from the past as the dynamic duo finds itself in an epic battle against a powerful new enemy.

Director Peyton Reed and Paul Rudd return to continue the story of Scott Lang in Ant-Man and the Wasp, and both have created a hero within the Marvel Cinematic Universe who can lead his franchise along with the likes of Thor, Captain America, Iron Man, Spider-Man and Black Panther. Ant-Man is a different type of hero, one with a sillier sense of humor. The script does an excellent job at balancing the comedy with the more serious moments of the movie. Reed also helps to bring that balance by incorporating sight gags at the right moment but lets the audience soak in the more dramatic moments when appropriate. Rudd brings all the charm and shines as the film’s co-lead.

The film thoroughly introduces Lilly’s Hope as a superhero with even greater skill as Scott Lang. Wasp’s status has been emphasized by Marvel Studios as the first female superhero to co-headline, and MCU movie, and Ant-Man and the Wasp doesn’t disappoint. Hope gets an equal amount of action sequences as Scott Lang, and the dynamic between the two helps balance the film’s comedy, with them as equal and Hope acting a the straight man to Scott’s more humoristic antics. And with the Wasps suit having blasters and wings brings out more dynamic action than Ant-Man, which elevates the film’s set pieces above what was seen in Ant-Man. Plus, Hooe takes center stage of the emotional arc of the film, a rescue mission to bring her mother back, and Lilly can hold that dramatic storyline together as well as the action portions of the movie.

Ant-Man and the Wasp showcase Marvel Studios at its best. The sequel can balance exciting action, well-timed humor and a deep emotional storyline which lets the heroes shine in their unique way while also tying into the larger MCU. After the massive and intense team-up that was Avengers: Infinity War, Ant-Man and the Wasp take us back to the more relaxed form for Marvel. No one outside of Marvel Studios is quite sure where things will go after Avengers 4 completes the first three phases of the MCU, but Ant-Man and the Wasp is a good indication that there is a great deal of potential for more heroes to step into the spotlight in Phase 4.