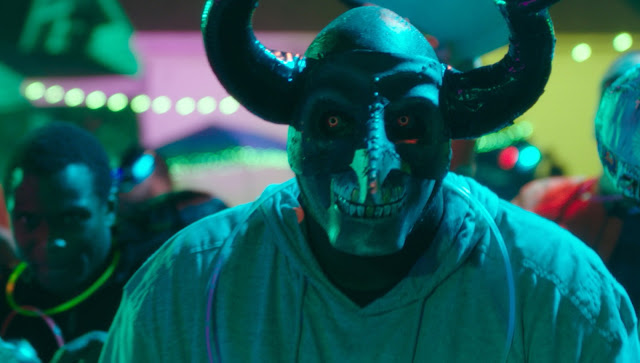 Think of all the good the purge does. The fourth installment of The Purge franchise takes us back its origins in The First Purge, now playing in theaters.

To push the crime rate below one percent for the rest of the year, the New Founding Fathers of America test a sociological theory that vents aggression for one night in one isolated community. But when the violence of oppressors meets the rage of the others, the contagion will explode from the trial-city borders and spread across the nation.

There haven’t been films quite like The Purge series that taps into one's anxiety and growing sense of societal unease. This prequel goes back to the origin of how the political regime is known as the New Founding Fathers of America (NFFA) formed; and how this one night of legalized crime came to be. The Experiment (as it's called in the film), is set in New York’s Staten Island and elevates the underlying theme of race, class, and power that have been seen throughout the previous films.

Written by James DeMonaco (who also created the franchise with the help of production company Blumhouse Pictures and Platinum Dunes) and directed by Gerard McMurray brings one of the more exciting and intense entries in the franchise. McMurry brings something new and fresh to the films; a real-life quality that stands apart from the make-believe from the last two films. This change in tone could be regarded as a move from theoretical to the actual; from thinking “How bad can it be?” to the scary realization of how bad it is.

More so than the other films, The First Purge dives straight at the connections regarding the utilization of power upon the less fortunate and people of color. There is a protest sign that says, “Being poor is not a crime” (This sign had been used in some of the film's advertising), and a protester emphasizes that the real purpose of this experiment is to keep black and brown people down.

As the night progresses, government agents are sent in to help provoke the worst in people, creating mass chaos and destruction. Even though these films have primarily been about uncontrolled mayhem tinged by a politicized context, The Purge films have had some exhilarating strong performances from Ethan Hawke and Lena Headey to Elizabeth Mitchell and Frank Grillo; and this film is no exception.

Y’lan Noel (Insecure), Lex Scott (Superfly) and Jovian Wade (Doctor Who) all deliver stellar, sympathetic performances as residents who are fighting to survive the night. Marisa Tomei felt slightly under-used as a behavioral scientist who designed the concept of this Experiment. Things go badly though when she discovers that it's being misused and abused by government officials with an agenda of their own.

Overall, The First Purge delivers a film that is pleasing to the genre with a little message of resilience. The film also includes a mid-credits scene to advertise the upcoming television spin-off set 10 years after this film.