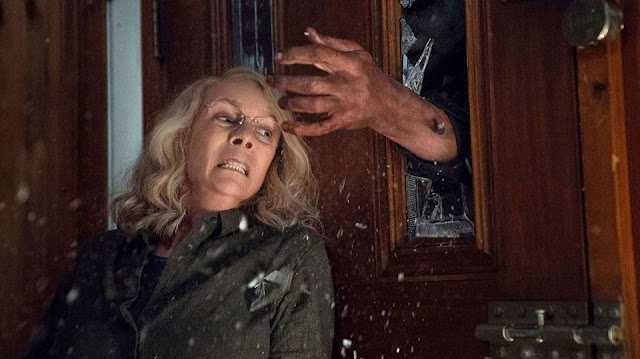 Comic-Con attendees were in for a terrifying treat on Friday, July 20th as fans got an extended look at Michael Myers killing anyone in his path.

The footage takes place on Halloween night, obviously. We see kids out trick or treating with their voices echoing around the streets. A group of kids in costume are walking when they suddenly bump into Michael Myers, who then walks past the kids to grab a hammer from a garage. Myers then walks around in a house and picks up a knife in the kitchen. A woman is in the kitchen, sees him, screams, and then he walks past her dead body. He then peers at a screaming baby in a crib and then walks out of the house.

The iconic Halloween theme by John Carpenter now starts to play as Michael Myers finds another house to terrorize. He walks around to a window and stares into it as the camera remains in place as Myers walks around the house only to be seen grabbing a new woman by the hair and smashing her face into the window. The scene then switches to Jamie Lee Curtis with a shotgun. From there, the footage goes on to fill in the backstory for Halloween 2018.

At the beginning of the panel, returning star Jamie Lee Curtis opened up about her character Laurie Strode, who comes face to face with Myers 40 years after being attacked by him in Carpenter’s original film. “Laurie Strode is a woman who has been waiting 40 years to face off against her greatest trauma, said Curtis. “And David Gordon Green wrote a character that says I am taking back my narrative and I am taking back my life.”


“Halloween is the greatest job I will ever have, “ said Curtis when asked what making the movie meant to her. “ Laurie Strode is the greatest character I will ever get to play. We made this little movie on the streets of Pasadena and LA… 40 years later here we are at Comic-Con. I am privileged to play this character in one of the greatest horror movies of all time.”