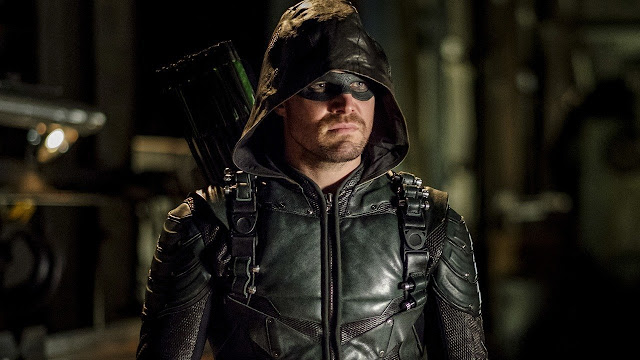 Season 6 of Arrow ended with Oliver outing himself as the Green Arrow and being sent to prison. With the newly released trailer that debuted during the show’s San Diego Comic-Con panel, fans got a little taste at what’s to come in season 7.


The new season will see the introduction to some new characters known as the Longbow Hunters, set to be played by Holly Elissa as Red Dart, Michael Jonsson as Kodiak and Miranda Edwards as Silencer. This legendary group of assassins is tasked by Ricardo Diaz (Kirk Acevedo) to enact his revenge on Team Arrow after they destroyed his criminal empire in season 6.


With Oliver now in prison, some familiar faces will be popping up including Michael Jai White as Ben Turner/Bronze Tiger, Cody Runnels as Derek Sampson and Vinnie Jones as Danny “Brick” Brickwell.


Oliver Queen has had many close calls when it came to protecting his identity as the Green Arrow, but in the season 6 finale, he was forced to reveal himself to the world as the Green Arrow. Now, Oliver will have to face many of the criminals that he and his team have put behind bars. He will become more vulnerable unlike ever before when a mysterious new enemy begins to undo all the work he did as the Green Arrow, challenging him to reclaim his name or lose everything he holds dear.


Check out the trailer below and let us know your thoughts! Arrow will return with brand new episodes on its new night and time, Monday, October 15 at 9/8c on the CW.