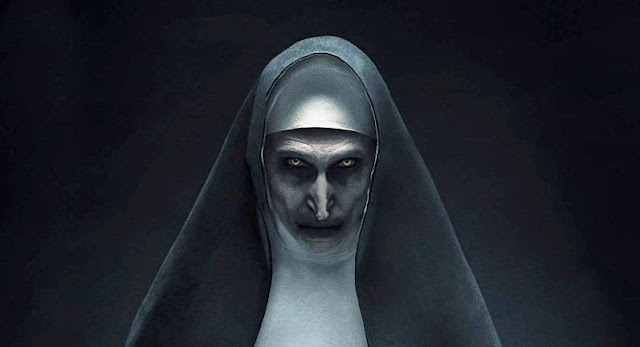 It looks like James Wan has another horror hit up his sleeve with The Nun, which is his a producer on and directed by Corin Hardy (The Hollow). We will have to wait till Sept. 7 to see this Conjuring universe movie, but horror fanatics can get a glimpse of the terror that awaits with the movie’s newly-released trailer.

The Nun is about a priest who has a haunted past and a trainee on the threshold of her final vows which are sent to Romania by the Vatican to investigate a suicide at an abbey. Together they discover a uncover dark, unholy secret and risk their lives -and their souls -to defeat a malicious force in the form of a demonic nun as the abbey becomes the battleground between the living and the dead.

The Nun stars Taissa Farmiga, Demian Bichir, Charlotte Hope, Jonas Bloquet, Bonnie Aarons and Ingrid Bisu. The movie is written by Gary Dauberman (It, the Annabelle films) based on a story by Wan and Dauberman and was shot in Romania and Transylvania.

“It was a fantastic experience,” Dauberman told Entertainment Weekly last year of the shoot. “Because of Dracula and all that, you’re like, ‘Well, I would love to go Transylvania, but I didn’t feel I would ever have the chance.’ Lo and behold, James has this idea: ‘Hey, I really think The Nun needs to be set in Romania.’ You’re like, ‘F—, alright!’ And you go there, and you realize, Oh, this is why he wants to set it in Romania. The production value, with the castles, and the mountains — it’s so beautiful and grand. And there’s not many people better to be within Romania and Transylvania than Corin Hardy, who lives and breathes this stuff. He had endless ideas. It was another great working experience, within the Conjuring universe.”

Watch the trailer for The Nun, below.