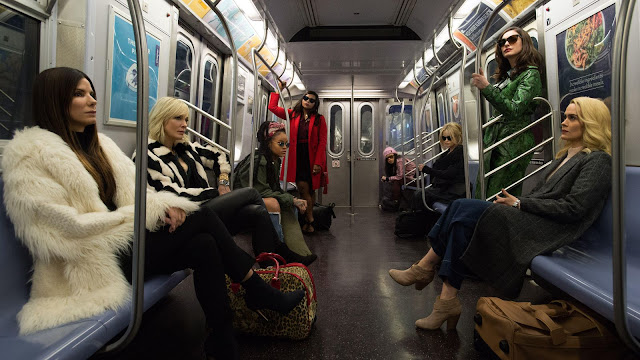 Sandra Bullock headlines a heist caper that’s clever enough to be sly and entertaining in Ocean’s 8, now playing in theaters.

Five years, eight months, 12 days and counting -- that's how long Debbie Ocean (Sandra Bullock) has been devising the biggest heist of her life. She knows what it's going to take -- a team of the best people in the field, starting with her partner-in-crime Lou Miller (Cate Blanchett). Together, they recruit a crew of specialists, including jeweler Amita (Mindy Kaling), street con Constance (Awkwafina), suburban mom Tammy (Sarah Paulson), hacker Nine Ball (Rihanna), and fashion designer Rose (Helena Bonham Carter). Their target -- a necklace that's worth more than $150 million.

It’s not the most outrageous or insane heist you’ve ever seen, but it's still amusing to get by. It still has that “Ocean’s” feeling, even when your head stops spinning enough to make you realize that what you just saw is an enjoyable comical mission impossible.

The first thing to say is that Ocean’s 8 takes the lousy mojo that - unfairly - the Ghostbusters remake left behind and throws it away. This gender-swapped sequel not only works but still maintains what audiences loved about the original “Ocean’s” films. Bullock and her crew come together and come up with a jigsaw puzzle of a heist with a levelheadedness that feels natural and will please the audience.

Sandra Bullock is just brilliant as she strides through the film with the promiscuous insolence of a hungry criminal who has raised thievery into an ideology. She doesn’t want to be rich; she wants to be spiritually sprung, under no one’s control. Cate Blanchett keeps her performance low-key and relaxed, shrouding her character in just enough mystery to keep you interested. All the other women -Helena Bonham Carter, Sarah Paulson, Mindy Kaling, Rihanna, and Awkwafina -have one or two moments, but then the film is mainly the Cate and Sandy show until Anne Hathaway shows up. Hathaway shines her beautiful smile and is commanding at every moment. Hathaway’s role is one all the women in Ocean’s 8 know well, but Hathaway is the one who gets to turn it into blissful, slyly comedy gold.