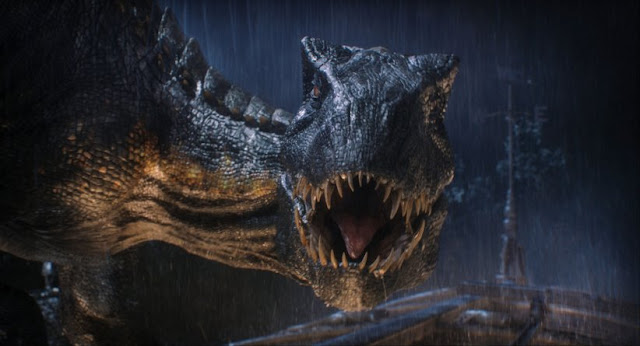 Jurassic World: Fallen Kingdom is an exhilarating ride full of fun adventure, and scares, that build upon the mythology of Jurassic Park in new exciting ways.

Picking up three years after the events of Jurassic World: Fallen Kingdom has Owen Grady (Chris Pratt) and Claire Dearing (Bryce Dallas Howard) return to the island of Isla Nublar to save the remaining dinosaurs from a volcano that's about to erupt. They soon encounter terrifying new breeds of gigantic dinosaurs, while uncovering a conspiracy that threatens the entire planet.


J.A. Bayona takes the reins as the director helming a script by Colin Trevorrow (who wrote and directed the last installment) and his Jurassic World co-writer Derek Connolly. Bayona (whose credits include The Orphanage, The Impossible and A Monster Calls) can balance horror with action and adventure in the films more exciting scenes. He can bring out as much tension out that will keep viewers on the edge of their seats, or more appropriately hands over their eyes, preparing for the scares. Bayona also adds plenty of exciting horror imagery in Fallen Kingdom, harnessing beautiful graphics to flush out as much emotion out of a scene as possible.


Bayona, with the help of screenwriters Trevorrow and Connolly, also brings a lot of heart and tragedy to the world, mostly concerning the dinosaurs. Fallen Kingdom further shows the wonder and amazement of seeing dinosaurs become real through de-extinction, while also balancing it with the actual cost of what it means, not only for the humans but the creatures who now have become real once again. One of the most significant things about the Jurassic Park films, both original and new, has been the concept of de-extinct dinosaurs and how they would coexist with humans in the modern age. Jurassic World took us back to Isla Nublar with a second attempt at creating the titular theme park, and Fallen Kingdom takes it up a notch to build out this alternate universe - creating a very different and very intriguing reality which will be further explored in Jurassic World 3.


Fallen Kingdom reunites it’s two leads, Chris Pratt and Bryce Dallas Howard. Pratt brings the same amount of charm and swagger as he did in Jurassic World, while Howard brings more dynamic and maturity to Claire in this film. Newcomers Franklin and Zia, played by Justice Smith and Daniella Pineda, add equal amounts of fun comedic relief and helps the plot progress. Although, the standout of the film would be Maise (played by Isabella Sermon), who turns out to be an exciting addition to the film. Longtime fans will be fascinated to see Jeff Goldblum return as Dr. Ian Malcolm, but it amounts to little more than a cameo.


Some of the aspects of Jurassic World: Fallen Kingdom are retreads of previous Jurassic Park films, with the movie’s Indoraptor repurposing the basic concept of Jurassic World’s Indominus Rex; making a human-made dinosaur the main antagonist. However, Fallen Kingdom feels much more of a fully realized idea and approach of the Jurassic World concept. The back half of the movie is just as engaging as the first, setting up many exciting events and comes together entirely in the third act. It's a very entertaining third act that helps set up Jurassic World 3 in taking the franchise somewhere new.


Ultimately, Jurassic World: Fallen Kingdom gives moviegoers the fun and adventure that comes with the Jurassic Park franchise while adding a great deal of horror and even more heart. The concept of Fallen Kingdom should give viewers more to think about concerning the real implications de-extinct dinosaurs would have on our existence here on Earth. And, with Bayona’s stunning visuals as added to the big action set pieces throughout the film, you might want to see this film in IMAX. Fallen Kingdom is hands-down a more mature and fully realized vision of the franchise and offers lots of entertainment for diehard Jurassic Park fans and casual moviegoers alike.