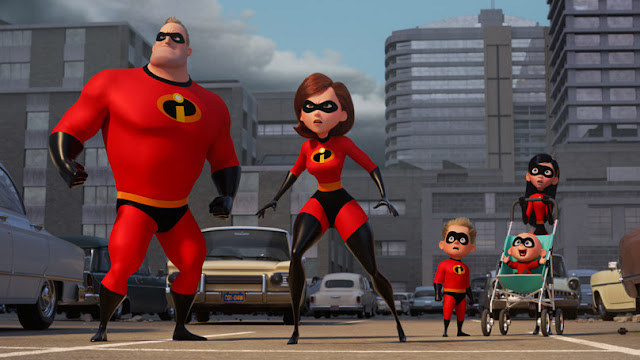 Director Brad Bird delivers a Pixar sequel that can stand up to the original with Incredibles 2, now playing in theaters.


Brad Bird is one of those directors who can turn action sequences into complete dynamite. The way he stages things is genius, making every jump and kick in a way that the audiences know precisely where to look, and inspired by ideas rather than the needs of getting to point A to point B.


Combing his skills with a score by Michael Giacchino, you get a film, 14 years in the making, that can still run circles around its peers. The colors all pop, the score is chalk full of catchy hooks, there is not a single set piece that is visually unclear, and the characters are perfect.


It’s a delight that Incredibles 2, which picks up right where the original film left off, is full of the same energy.


At its core, Incredibles 2 is still a family story, but it's more prominent in scale and a bit darker. The superpowered Parr family and Frozone (Samuel L. Jackson) aren’t alone anymore. As the legality of superheroes come into question, the Parrs are brought into contact with other supers, and politics on a global scale.


The first film put Mr. Incredible (Craig T. Nelson) out in the field, but this time mom gets her time to shine. When telecommunications guru Winston Deavor (Bob Odenkirk) and his sister Evelyn (Catherine Keener) enlists Elastigirl (Holly Hunter) to fight crime and make the public fall in love with superheroes once again; that leaves Mr. Incredible with one of his most significant challenges ever -- staying home and taking care of three rambunctious children. As Violet, Dash and Jack-Jack offer him a new set of headaches, a cybercriminal named Screenslaver launches his dastardly plan -- hypnotizing the world through computer screens. Now the stay at home dad storyline is essential grounding. Bird doesn’t make raising a family a chore; these are people who love each other, and that is the necessary glue for the action that comes after.


The chases and fight sequences are arguably the most significant things of Incredibles 2. Even though it’s an animated movie, the leaps and bounds that have been made in animation over the years give it that distinct advantage over everyone else. There is absolutely no limit to where the camera can go, and what the characters can do.


When ElastiGirl goes after Screenslaver, its almost like she has leveled up, like in a video game, since we last saw her as she stretches out and snaps back into place that works perfectly with her brand new motorcycle, which can split in half to accommodate the shape of its rider. It becomes clear just how solid Bird’s form is when you throw more superheroes into the mix, as the movie’s sense of motion shifts to show off their superpowers. Take Voyd (Sophia Bush), for example, she has the power to create endless portal loops or can send characters from one place to another; the shots take on that same sense of suspended or condensed motion.

The “camera” is even better than it was back in 2004, zooming around the scene and provides clarity even when the rubble starts flying. The film is exceptionally cleaner than most movies it’s easy to follow the action in Incredibles 2 even though its all technically CGI.


The best way to explain Incredibles 2 is to say that it has character. It’s not part of a larger universe, and the freedom and distinct sense of personality that liberty allows are what makes the film special.