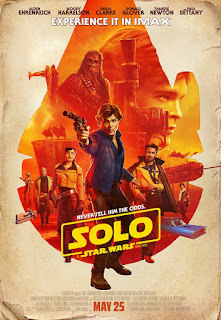 
Young Han Solo (Alden Ehrenreich) finds adventure when he joins a gang of galactic smugglers, including a 196-year-old Wookie named Chewbacca (Joonas Suotamo). Indebted to the gangster Dryden Vos (Paul Bettany), the crew devises a daring plan to travel to the mining planet Kessel to steal a batch of valuable coaxium. In need of a fast ship, Solo meets Lando Calrissian (Donald Glover), the suave owner of the perfect vessel for the dangerous mission -- the Millennium Falcon.


Star Wars veteran Lawrence Kasdan and his son Jonathan Kasdan helm the script and delivers every story point fans of the iconic character would expect in an origin story. The first act of the film depicts everything from how he got his name to when he meets his loveable co-pilot. These aspects of Han’s origin help answer questions that fans have been wondering since his original introduction. Plus, they offer some fun insights into his character, and his relationship with Chewbacca, that fans will be pleased to see.


Solo also manages to offer a slightly different tone to the Star Wars universe. Even though this film is still firmly set in a galaxy far, far away, the aspect of Han’s life takes viewers into a much more grounded side of the Star Wars franchise. Using the crime syndicates as a much more significant threat than the Empire to Han and those he grew up with on Corellia, it gives viewers a different look of the universe. Solo is probably one of the darker entries in the franchise overall, but it still manages to still fit the character with inspirations from westerns and heist films. These inspirations help Solo stand apart from the rest of the movie, but still fits nicely into the Star Wars brand.


Director Ron Howard was brought in midway through production after original directors Phil Lord and Chris Miller got fired by Lucasfilm. Howard brings a much more grounded feel to the movie and is helped by cinematographer Bradford Young. Howard has a skilled hand in bringing in a range of emotions to the film, adding humor when humor is needed. Howard can bring in real emotional and physical stakes to the movie, a problematic take for an origin story when three of the main characters are known to live to fight another day.


Alden Ehrenreich deserves a whole lot of praise for his performance of the iconic character. Ehrenreich brings the right charm and depth to the role. He doesn’t try to impersonate Harrison Ford’s Han, but he makes the character his while honoring the mannerisms of the character. Woody Harrelson does a great job as Beckett, playing off of Ehrenreich’s Han in creating a believable mentor-mentee dynamic. Donald Glover is a standout performer as Lando Calrissian, and I’m sure audiences will be calling for more of Glover’s character in new Star Wars anthology films. And, of course, we can’t forget Emilia Clarke who excels as Qi’ra and comes with some surprises along the way.


Solo: A Star Wars Story ultimately delivers on what it promised: an entertaining origin story that explains how Han Solo became the smuggler we loved when he was introduced in A New Hope. The movie does take on some risks but offers exciting surprises. It can be risky casting someone new on an iconic role like Han Solo and releasing a prequel film that will excite both new and old fans, but Solo pulls it off. Solo: A Star Wars Story will please longtime fans of the franchise, but may not be enjoyable for those who have a casual interest in Star Wars.