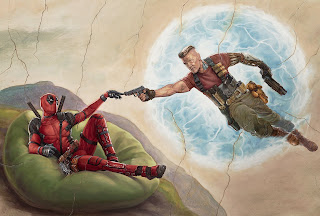 Funnier, filthier and damn entertaining, Deadpool 2 - now playing in theaters - leaves no stone unconstructed: the naughty, foul-mouthed man-child of the X-Men universe manages to beat them at their own game.


Where does one even begin to write a review for a movie that has a lead character so self-aware he’s capable of reading it, then uses witty wisecracks towards it with many cleverly offensive humiliation? Deadpool is a superhero who has his own set of rules, in which no one is ready for his peculiar brand of hyper wit, especially himself. So, this sequel opens up with a comment on the box office of the first film and ends with Wade Wilson hilariously facing his greatly mocked X-Men Origins: Wolverine past head-on.

For those who are concerned about the premise - mercenary-turned-mutant Wade Wilson shatters bad guys and fourth walls - struggling to sustain itself into a second movie will have nothing to fear. I would be fair to say that if the first film didn’t do anything for you, the second film probably would have the same outcome, but if you’re ready to go then Deadpool 2 is more entertaining than ever.


The film has Deadpool in a depression for some of the movie, which is a brave choice for a franchise founded on extreme snark and dick jokes. But the script (which has Reynolds as a co-writer) pretty much joggles its surprising emotional aspect alongside its usual brand of humor. Wade now wants to start a family, and Reynolds manages to sell the vulnerable stuff from underneath his red spandex and burn-victim prosthetics.


Wade finds a family in a bunch of new characters, most from the comics, and an upgrade on the first film’s villain. The clear standouts of these new characters are Zazie Beetz’s Domino, whose superpower of “luck” makes her enjoyably invincible; and Josh Brolin’s Cable will make you quickly forget he was also Thanos (even though Deadpool hilariously reminds you).

But even with this new ensemble, it’s still Reynolds show. Whether he is slicing scoundrels like kabobs, or embarking on the most clever Basic Instinct gag ever seen on screen, this cements Deadpool as his defining role; and paired with John Wick director David Leitch, the action feels more muscular and inventive. I would say that it’s rare when a sequel surpasses the original - but as Deadpool would put it: “That’s just lazy writing.”