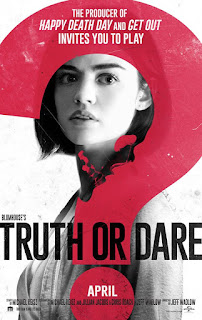 Everyone loves a good party game but in Blumhouses’ new horror movie Truth or Dare, now playing in theaters, the game is taken way to far.

Olivia (Lucy Hale), Lucas (Tyler Posey) and a group of their college friends travel to Mexico for one last getaway before graduation. While there, a stranger convinces one of the students to play a seemingly harmless game of truth or dare with the others. Once the game starts, it awakens something evil -- a demon which forces the friends to share dark secrets and confront their deepest fears. The rules are simple but wicked -- tell the truth or die, do the dare or die, and if you stop playing, you die.

Most drinking games tend to turn into horror shows. People end up finding out things they weren’t supposed to know or wake up regretting spilling their secrets. The spunky teens of Truth or Dare have more to mourn than most, like choosing to drunkenly play the title game with a complete stranger in an abandoned Mexican church which doesn’t end well for them.

Jason Blum’s has been known for scaring up some significant hits like Insidious and Get Out, Truth or Dare is a decent entry in the studio’s history. 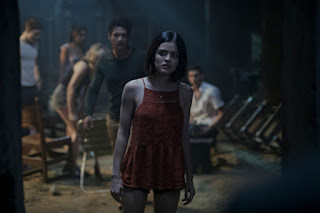 While this film isn’t as scary as most films of Blum’s, it's suspenseful scenes are creepy enough to be excellent and enjoyable. The creepy smiles alone are enough to give one a nightmare along with the creepy voices that follow.

The primary ensemble is excellent at drawing out their characters while giving the audience someone to latch onto. Lucy Hale (Pretty Little Liars) is brilliant as Oliva and has undoubtedly left Rosewood behind, and the twists in the plot make her more endearing as the film goes on. The likes of Tyler Posey (Teen Wolf) and Violett Beane (The Flash) are significant as their characters help create sticky relationships between them and Olivia and takes an exciting turn when the evil that is haunting they test them.

Truth or Dare may not be as scary as it should be, but its still gripping, fun and witty. If viewers go into this film with the right mindset and view it as a horror comedy, they will have fun watching this film. You can view the trailer here.