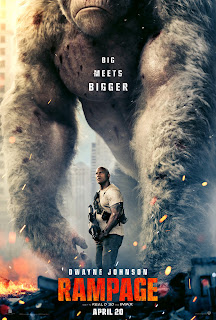 Global icon Dwayne Johnson stars in the new monster-action movie Rampage, now playing in theaters and it is a work of genius.

Johnson stars as primatologist Davis Okoye, a man who keeps people at a distance but shares an unshakable bond with George, the extraordinarily intelligent, incredibly rare albino silverback gorilla who has been in his care since he rescued the young orphan from poachers. But a rogue genetic experiment gone awry mutates this gentle ape into a raging creature of enormous size. To make matters worse, they soon discover that there are other similarly altered animals. As these newly created alpha predators tear across North America, destroying everything in their path, Okoye teams with discredited geneticist Kate Caldwell (Naomie Harris) to secure an antidote, fighting his way through an ever-changing battlefield, not only to halt a global catastrophe but to save the fearsome creature that was once his friend.

Rampage is a decent disaster movie with stunning CGI special effects and charming sign-language humor from a giant gorilla. This movie has it all: a greedy corporate villain, a smart scientist, a sensitive and robust hero, big monsters, tons of destruction and a modest message that its humans who are the real animals. The movie is shot in a clear and coherent way that pretty much lets you know exactly where you are mainly during the climactic action sequences. 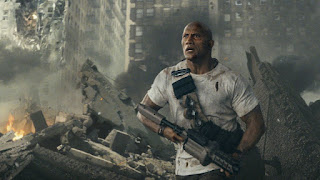 It’s comforting to watch these massive fight scenes that feel so straightforward - rather than trying to make you dizzy, and it makes you want to jump out of your seat and cheer.

Dwayne Johnson proves that he is one of the few remaining stars who can open a movie just because he is in it and make it a big success. That is due mainly to his dedication to every project he does, and it’s rewarding to see that dedication in the finished product. Some of the best scenes in Rampage are between Johnson and George, the albino gorilla. These moments are genuinely funny because the gorilla has an excellent sense of humor. The pair’s chemistry is unique, and that provides some genuinely touching moments with their relationship.

Rampage is an entertaining, gripping, smart and fun film that is one hell of a wild ride.