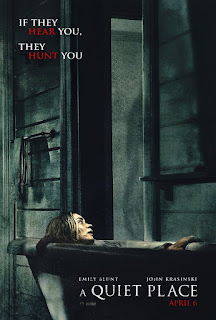 A Quiet Place, now playing in theaters, lives up to the challenge that most horror movies face: taking the audience on a compelling journey filled with suspense.

In A Quiet Place, a family of four must navigate their lives in silence after mysterious creatures that hunt by sound threatens their survival. If they hear you, they hunt you. This film is the perfect example of how to take a simple concept - creatures that hunt using sound - and turn it into a lean, mean creature feature with stable human emotions at its core. The movie further establishes John Krasinski as a pure talent behind the scenes, as he not only stars in the film but also directed, wrote, and executive produced as well.

A Quiet Place succeeds at tapping into the fears of being a parent with children in a troubled dystopian world and even down the set piece where the creatures hunt people hiding in basements desperately trying now to draw attention to themselves. Krasinki and he co-writers do a phenomenal job at maintaining an air of mystery surrounding the film’s creatures, which strengths the film’s theme about the experience of raising kids to survive in a world so dangerous that even their parents don’t fully understand. Add to the fact that star’s John Krasinki and Emily Blunt are married in real life with kids of their own only helps at making the message (and the film itself) feel that much more personal.

Horror films tend to fall short of developing their characters and focus on scares. A Quiet Place succeeds in this department strictly through visual means, without making the lack of dialogue come off as a gimmick. The film finds simple ways at explaining how the Abbots have managed to stay alive in this post-apocalyptic world without being too heavy in its non-verbal methods; for example, the fact that the family has a daughter who is deaf before the creatures attacked explains them knowing sign language so well.

With that in mind, the film is effective in its use of sound, as the film’s sharp audio editing and the ominous score by Marco Beltrami eeriness throughout the film. Some of the film’s jump-scare tactics tend to be less original than others, but the movie does a great job developing a good deal of tension out of Regan (Millicent Simmonds) inability to hear the world around her.

Most of what makes A Quiet Place effective in its scary moments is the time it takes to develop the characters concerns and motivations over the first half of the film; then things go south fast in the second half. Krasinki has a way to express a variety of thoughts and feelings with just a simple look at the camera, and he puts that skill to great use in the movie. Blunt is as strong in her role, whether she is teaching her children, so they have a full education or being a badass while fighting giant monsters while on the verge of giving birth. Noah Jupe and Regan Simmonds are equally gripping as the children, and the fact that Simmonds is deaf in real life makes her performance all the more authentic.

The use of photography in this film is remarkable as it captures the Abbots’ sense of isolation and the feeling that danger is lurking around every corner through the film’s visuals. From the tight angles throughout the film’s suspenseful scenes to the spacious shots of the family’s fortified home and the farmland that surrounds it.

A Quiet Place is the perfect modern creature thriller that deals with serious issues and concerns in a meaningful way. The film reaches that middle ground between thrill ride that most horror films offer and thoughtful entry in the genre.