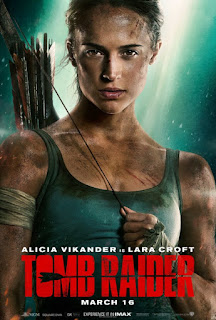 Alicia Vikander brings a refreshing, new take on the pop culture icon that is Lara Croft in Tomb Raider, now playing in theaters.

Lara Croft (Alicia Vikander) is the fiercely independent daughter of an eccentric adventurer who vanished years earlier. Hoping to solve the mystery of her father's disappearance, Croft embarks on a perilous journey to his last-known destination -- a fabled tomb on a mythical island that might be somewhere off the coast of Japan. The stakes couldn't be higher as Lara must rely on her sharp mind, blind faith and stubborn spirit to venture into the unknown.

What is so refreshing about this new Tomb Raider film is that Alicia Vikander plays Croft as an imploring, impulsive young woman who is in over head but will beat the odds anyway. Vikander’s Lara is by far one of the most believable cinematic video game protagonist I’ve seen in a long time. And since we are able to buy her as a person, it makes the movie that more enjoyable.

The movies sets pieces are amazing and are lifted right out of the video game, like one scene where Lara shimmies over the rusty-jointed ruins of a propeller plane that is balanced over a mile-high abyss. Yet not all sequences are like that, in fact it remains very much it’s own thing. Like with a “fox hunt” bike race through the streets of London, where Lara, working as a courier, volunteers herself as the “fox,” wearing a tail and carrying a can of dripping paint. She has to escape the mass of bike riding “hunters,” and accomplishes it with split-second creativity that is gonna serve her well on her upcoming adventure. 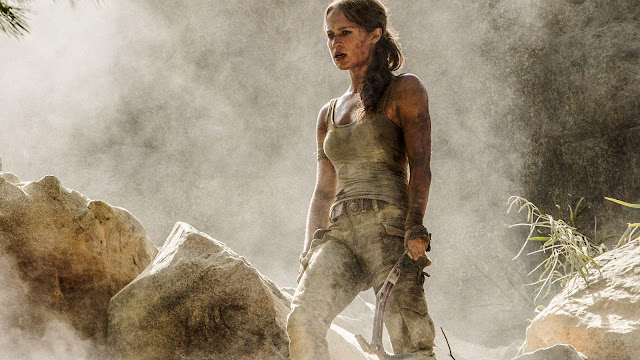 Lara isn’t your typical heiress. She is disconnected from her family’s enormous fortune (for which she doesn’t have access to yet), but it's her relationship with her missing father that is the film’s emotional core. You first witness this in flashbacks when her father is saying goodbye to his daughter as her sets off another open-ended business trip.

Much of what makes Tomb Raider effective is a fresh but old-fashioned idea by director Roar Uthaug: the decision to shoot the movie that pivots around omens, curses, jade amulets and an ending that isn’t a glossy bold cliffhanger, but as a “realistic” thriller that might take place. Tomb Raider’s likability that it embodies the kick-ass reverie of feminine power. Vikander is incredible at playing someone who’s not an action heroine, but becoming an action heroine. Tomb Raider gives Vikander a chance to carve out a true character and you will walk out feeling entertained. Tomb Raider is an absolute, action-pack blast and audiences will not want to miss her legend begin!