The Strangers: Prey at Night Review 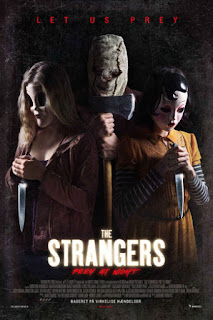 It's been nearly 10 years since The Strangers come onto the scene and sent chills down the bones of audiences, and now the trio of masked, motiveless killers are back in The Strangers: Prey at Night.

Mike (Martin Henderson) and his wife Cindy (Christina Hendricks) take their son (Lewis Pullman) and daughter (Bailee Madison) on a road trip that becomes their worst nightmare. The family members soon find themselves in a desperate fight for survival when they arrive at a secluded mobile home park that's mysteriously deserted -- until three masked psychopaths show up to satisfy their thirst for blood.

10 years for the horror genre is like an aeon, since then we have had some pretty good horror films: four Insidious films, and the ever expanding Conjuring universe. Still, no film in my opinion has scared me as much as The Strangers. This new film is a pretty good follow up and a fresh spin on the original movie’s template.

Christina Hendricks and Martin Henderson are great as the parents but don’t really get much to do. Lewis Pullman plays the older brother and spends the majority of the film kind of wimpy. However, he finally grows a pair towards the end of the movie and delivers one of the coolest scenes in the film. I have been a fan of Bailee Madison’s since Just Go With It and she has grown up into such an incredible actress. Madison plays her character so well that she looks truly terrified and gets one of my favorite scenes. She is face to face with one of the killers and asks “Why are you doing this?” and the assailant, looks right back at herand summons her best sickie-harpy grin as she say, “Why not?” That sends chills down my spine just like in the first film when Liv Tyler asks the same question and the assailant answers, “Because you were home.” That just shows how sick and twisted the trio are. 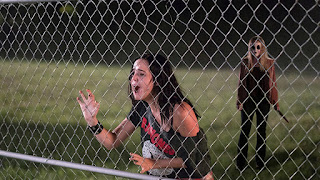 Speaking of the trio, they are so good at being creepy and move with a Michael Myers type likeness that adds to the suspense. The man in the burlap sack is like a mix of Michael Myers and Jason Voorhees and the two women are just as terrifying.

Director Johannes Roberts does a fantastic job at building the suspense and delivers all the cliche and trope of movie scares: the creaking door, the creepy children’s toy, the car chasing and makes effective use of the camera. And what horror movie isn’t complete without the slasher victim who, annoyingly, never looks over their shoulder, always goes in alone and keeps losing the phone or the gun or the car keys that would guarantee their survival. But that’s what we love about horror films right? We love to yell at the screen going “Don’t go into the basement” or “He is right behind you! Run, idiot, run!” All in all, 10 years was long time to wait for a sequel but it was worth it as The Strangers: Prey at Night delivers a satisfying and terrifying story.