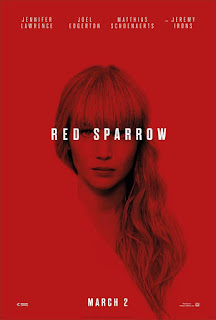 Jennifer Lawrence shines her star power as a Russian spy driven by survival in a game of espionage in her new thrilling movie Red Sparrow, now playing in theaters.

Prima ballerina Dominika Egorova (Jennifer Lawrence) faces a bleak and uncertain future after she suffers an injury that ends her career. She soon turns to Sparrow School, a secret intelligence service that trains exceptional young people to use their minds and bodies as weapons. Egorova emerges as the most dangerous Sparrow after completing the sadistic training process. As she comes to terms with her new abilities, Dominika meets a CIA agent (Joel Edgerton) who tries to convince her that he is the only person she can trust.

Jennifer Lawrence portrays a Russian spy who’s cunning and desperate human being, or at least enough of one that each scene revolves around the choices she makes, the way she evaluates and seizes the moment. In this film, Lawrence shows you what true star power is all about. She plays a spy as someone who plays a role, but does so by acting as little as possible; she sets each scene with a different mood, leaving audiences in a constant state of discovery. We are on her side, but more importantly than that we are in her head. Even when we are being played, of course.

Directed by Francis Lawrence (who directed Lawrence in the last three Hunger Games films) and screenplay by Justin Haythe and based on the 2003 book by former C.I.A operative Jason Matthews, Red Sparrow taps into the audience’s intelligence rather than insulting it. Red Sparrow is about a heroine who has her choices taken away from her by a thug patriarchy. The training school she has to attend is run by an icy headmistress (played by Charlotte Rampling) who makes Dolores Umbridge from Harry Potter look like a cakewalk. The school amounts to a series of encounter sessions in which the recruits are forced to strip down in every way possible. They are completely used like utensils (“Your body belongs to the state,” says Rampling), which they learn to manipulate. Lawrence owns her nakedness and makes it dramatic; she plays her character as shamed and proud at the same time. Dominika truly resents her “whore school” training. But its shows the dark underbelly of the tradecraft. 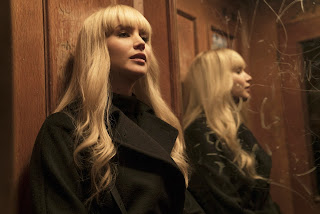 What is clever about this espionage thriller is the small romantic spark between Lawrence’s Dominika when she is sent to have a “chance” encounter with Joel Edgerton’s Nate Nash, an American C.I.A operative who has a mole high up in the Russian regime, but they quickly figure each other out. And that’s when the film starts to keep you guessing what’s at stake.

The set-up is pretty basic (will Dominika uncover the mole?), but the movie has enough twists and turns to be a satisfying night out. It’s more talk than action, but it's done in a really gratifying unfolding way. Dominika teams up with the Americans at one point which leads to the film’s most suspenseful sequences, featuring Mary-Louise Parker as a drunken mess who is the chief of staff for a U.S. senator. The double-crossing isn’t typical - in fact, it’s messy, rooted with desperation and strong hunger. Edgerton makes Nash a realistic operative, noble but far from superman. And Lawrence’s Dominika is gripping, because she has to keep improvising. She has been trained in the art of survival, and does, dealing with everything from extreme torture to her boss’ disgusting come-ons. But here is the thing, is she calling the shots, or are the shots calling her.

Lawrence has a great look and eases into the soul of playing a Russian. She does it with a very believable accent. For what feel like forever, a thriller resurrects the Cold War tensions in a way that never feels corny, since the Russians, in Red Sparrow, are accepting the new world order: a global marketplace of people selling themselves. It’s no wonder the spy game is harder now than it has ever been.