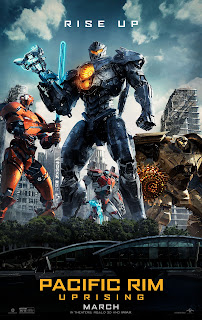 Sci-fi movies can at times lose their footing with a second film but Pacific Rim Uprising, now playing in theaters, is an enjoyable ride with giant robots and monsters.

Jake Pentecost (John Boyega) is a once-promising Jaeger pilot whose legendary father gave his life to secure humanity's victory against the monstrous Kaiju. Jake has since abandoned his training only to become caught up in a criminal underworld. But when an even more unstoppable threat is unleashed to tear through cities and bring the world to its knees, Jake is given one last chance by his estranged sister, Mako Mori (Rinko Kikuchi), to live up to his father's legacy.

Star Wars star John Boyega stars as Jake Pentecost and uses his charm to great effect at creating a very real and believable character. Scott Eastwood joins the cast and and uses his uncanny resemblance to to his father Clint to pleasing effect. The chemistry between Boyega and Eastwood is gold and probably one of the best things about this movie. Pacific Rim Uprising features the return of Charlie Day and Burn Gorman as eccentric scientist- one of whose eccentricity have grown quite more extreme and downright scary.

The first hour of the film deals with the Top Gun-style cadet rivalries and a corporate espionage plot that is done why to often, but this film keeps it pretty interesting. And of course you know that the scaly, slimy creatures are going to turn up at some point, and when they do, they spend a good chunk of time in Tokyo. The special effects of this film is mindblowing and especially when used in the action sequences between the robots and monsters.

Director Steven S. DeKnight does a great job at balancing the movie’s friendly humor and standard believe-in-yourself bromides with awesome action sequences. Pacific Rim Uprising is a mix between Transformers and Godzilla, but without the annoyance that the Transformers films brings. If you enjoyed the first film, you will certainly enjoying this installment.