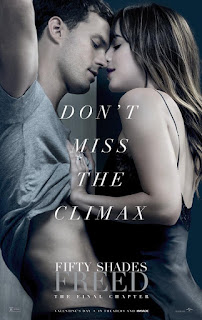 Dakota Johnson and Jamie Dornan return one last time in the final chapter of the Fifty Shades series based off the popular book trilog by E.L. James, Fifty Shades Freed, now playing in theaters.

Believing they've left behind the shadowy figures from the past, billionaire Christian Grey (Jamie Dornan) and his new wife, Anastasia (Dakota Johnson), fully embrace their inextricable connection and shared life of luxury. Just as the Greys begin to step into their new roles, sinister events come to light and jeopardize their happy ending before it even begins.

Fifty Shades Freed brings back the creative team that worked on Fifty Shades Darker, with the script written by James’s husband Niall Leonard and directed by James Foley. After all of the fights that reportedly happened during filming of the first film between James and Sam Taylor-Johnson, it definitely seems the author of the film series’ source material was given more creative control to bring her vision to life. And I think having her husband write the script was a great idea because Fifty Shades Freed, as well as Fifty Shades Darker, delivers a much more faithful adaptation of the novel on which the film is based on. THe overall story of the book is brought to life in Fifty Shades Freed with compelling drama and little bits of humor.

Dakota Johnson and Jamie Dornan do a great job in the roles and this film allows the characters to break out from their respective roles - Christian is more is still possessive but their is more warmth and charm to his character now, and Ana goes from being the timid, clumsy girl to being more assertive and knows what she wants. 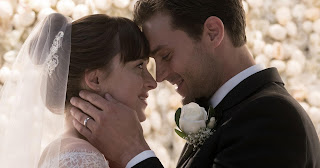 Arguably, what made James’ Fifty Shades book series so popular with readers wasn’t the fact that it is fanfiction based on Stephenie Meyer’s Twilight and not necessarily the characters to the extent as they were independent to each other. Of course, the dramatic twists certainly helped readers stay invested in Ana and Christian’s epic love story, but it was mainly the curiosity over a romance novel with a different, and explicitly sexual, bent. The escapism of a typical romance novel and the world of BDSM-tinged erotica helped the series skyrocket to being a worldwide phenomenon, and Fifty Shades Freed gives fans a faithful adaptation of the source material.