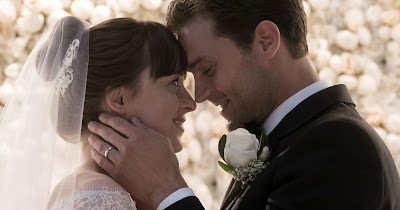 It's never easy to be married to a handsome billionaire with a particular set of skills in the bedroom, not to mention a crazy ex-boss and an architect making moves toward your man. But in this newly released trailer for Fifty Shades Freed, Dakota Johnson’s Ana now faces another major curveball in her life.

The newly married Mrs. Grey is indeed pregnant, as she discovers in the final moments of the trailer. It was just a few months ago that Universal released what was believed to be the final trailer- really glad that isn’t the case. The Fifty Shades book trilogy were originally written by E.L. James as Twilight fanfiction, and the film series is continuing to mirror this particular arch with the baby announcement.