Insidious: The Last Key, now playing in theaters, is an intriguing horror prequel that delivers scars which will give you chills.

When you start to get into a franchise, you start to have high expectations. Insidious: The Last Key, the fourth installment in the Insidious saga, is a spooky tale which tells the continuing story of parapsychologist Elise adventures into the “further”.

Much like the previous films, the complex treatment is excellently crafted by the director of Insidious 3, Leigh Whannell. The horror drama is as adventurous as it is scary.

The story goes like this: Brilliant parapsychologist Elise Rainier (Lin Shaye) receives a disturbing phone call from a man who claims that his house is haunted. Even more disturbing is the address, 413 Apple Tree Lane in Five Keys, N.M., which is the home where Elise grew up as a child. Accompanied by her two investigative partners, Elise travels to Five Keys to confront and destroy her greatest fear, the demon that she accidentally set free years earlier.

What follows as the story develops is a tale of buried secrets and repressed horror that reveals the truth about the ghosts and what Elise saw as a child. These hauntings are paired with a series of jump scares that are well thought out and executed perfectly. Also, the creature wreaking havoc here will creep you out and might possibly give you nightmares. 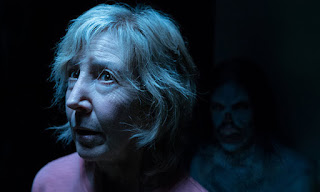 The performances of every actor is realist and natural. Lin Shaye is remarkable as Elise and always makes you want to root for her. Angus Sampson and Leigh Whannell return as her tech savvy assistants, Tucker and Specs, and offer the film the comedic relief to balance out the scars and drama. Bruce Davidson takes on the role of Elise’s brother Christian, Tessa Ferrer and Josh Stewart play her parents, Audrey and Gerard Rainer, and gives remarkable performances which brings to light Elise’s past. Spencer Locke and Caitlin Gerard play her nieces Melissa and Imogen who are just fantastic.

The cinematography, sound effects as well as the production quality of the film are so good and unfailing. The visuals are out of this world. The live action frames merge together extremely well with the computer-generated images to create realistic and effective scares that will chill you to core. The eerie lighting and excellent sound design helps enhance the horror aspect.


The film starts off as an intriguing tale and ends up becoming an inspired and original horror tale which helps the Insidious saga come full circle. Hopefully this film does as well as the last three so we get fifth installment in this amazing series.