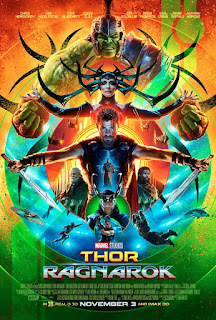 As with Marvel properties, third time's the charm. The God of Thunder is back and mightier than ever in Thor: Ragnarok, now playing in theaters.

With Marvel films, each hero gets their own origin story: then you get the sequel to up the ante. When a film gets to their third outing, they are able to cut loose, let their hair down and have fun. We had Captain America fight his friends in Civil War and Iron Man 3 gave audiences Marvel’s most personal and subversive story.

In Thor: Ragnarok, Thor (Chris Hemsworth) finds himself imprisoned on the other side of the universe and in a deadly gladiatorial contest that pits him against the Hulk (Mark Ruffalo), his former ally and fellow Avenger. Thor's quest for survival leads him in a race against time to prevent the all-powerful Hela (Cate Blanchett) from destroying his home world and the Asgardian civilization.

Director Taika Waititi does a great job a delivering a Marvel movie that is something other than an action movie with little bits of humour, but a full-blown comedy that uses blockbuster performances as a backdrop for gags. Starting with a laugh-heavy prologue - which we see Thor dangling and continually interrupting the demon Surtur’s (Clancy Brown) gloating monologue - into a hilarious showdown with Loki -as-Odin (Tom Hiddleston) that properly kickstarts the story.

Chris Hemsworth has never been more comfortable in his role. The time he spent on films like Ghostbusters and Vacation definitely paid off in lending him more of a feel for comedy. Hemsworth is still able to bring out his charming and charismatic side to Thor. It’s so good to Have Mark Ruffalo back as Bruce Banner/Hulk and is just as delightful as ever. He delivers such lines as, “Guys, we’re coming up on the Devil’s Anus!” without a stutter.

Ragnarok’s humour is as eccentric as it is broad. With wank jokes, arse puns, vampire gags, in-jokes, snarky asides and buffoonery to please just about everyone. The director himself is even in the film and is a comedy standout. As rock-hewn gladiator Korg, Waititi is a scene stealer with his softly spoken Kiwi commentary.

Cate Blanchett is great as Hela, looking extremely hot and a little like Alice Cooper’s stroppy sister. Blanchette, however, is outshone by the other major new character in the film, Valkyrie played by the brilliant Tessa Thompson, at every turn. Hela’s scenes may be essential to the plot, but feels like an distraction.

Ragnarok is a perfect combination of action and humour and is a top-tier addition to the MCU and is quite possible one of the most enjoyable films of the year.