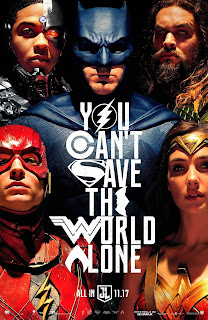 Warner Bros./DC Comics seem to finally be heading the right direction with their extended universe with Justice League, now playing in theaters.

Fueled by his restored faith in humanity and inspired by Superman's selfless act, Bruce Wayne enlists newfound ally Diana Prince to face an even greater threat. Together, Batman and Wonder Woman work quickly to recruit a team to stand against this newly awakened enemy. Despite the formation of an unprecedented league of heroes -- Batman, Wonder Woman, Aquaman, Cyborg and the Flash -- it may be too late to save the planet from an assault of catastrophic proportions.

The pumped-up Ben Affleck once again fills out the bat suit and is still a pretty badass Batman. He seems to have some kind of unrequited thing for Wonder Woman (played by the amazing Gal Gadot, who pretty much helps hold the film together), which causes him to stammer like a teenager which was hard not to laugh at. He has money and a pretty good sense of humor, including his wealth, which inspires one of the films laughs.

Justice League is about solidarity rather than trying to fly solo, so the movie spends a decent amount of time establishing its newer characters: Ezra Miller (The Flash/Barry Allen), is a zippy young man wreathed in lightning; Jason Momoa (Aquaman/Arthur Curry), is a tough underwater warrior with a chest full of muscles and some pretty cool tattoos; and Ray Fisher (Cyborg/Victor Stone), a man built from metal after a terrible accident and lots of attitude. 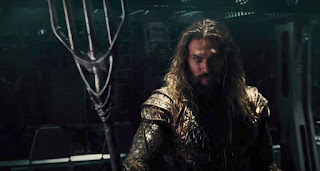 When I first heard about Ezra Miller taking on the role I was skeptical, as I’m sure lots of people were, mainly because The Flash television show starring Grant Gustin as the title character had just aired. However, after screening the film, Miller was phenomenal and got most of the best jokes. He makes them work, mainly as a in-house fanboy with a touch of the Cowardly Lion and Miller keeps you hooked. Same goes for Momoa who shifts between seriousness and comedy. When Aquaman chugs a bottle of booze before he dives into an angry sea, the movie hits that comicbook sweet spot goes between deadly seriousness and self-amused humor. 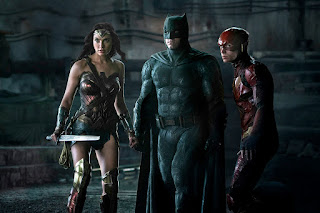 Ray Fisher did a decent job with Cyborg, although he spends most of his scenes wearing a hoodie with a bowed head and noticeable heaviness. But that makes sense considered his character was partly cobbled together from scraps. With these new characters the film doesn't really get into their backstory, except we get a glimmer of one with Barry Allen, but that's mainly because they each have solo films coming out.

Director Zack Snyder still remains committed to a dark form of storytelling, but with the touches of humor in Justice League lighten the movie up which is a relief after what he did with Batman v Superman, which dragged on with a two-and-a-half-hour runtime (Justice League’s runtime is less than two hours). Written by Chris Terrio and Joss Whedon, this film shows that universe is still trying to figure itself out but is heading in the right direction. It may not be a multidimensional as Marvel’s extended universe, but it has justice, and it has banter which is a good start. And make sure to stay till after the credits as there are two post-credit scenes you won’t want to miss.