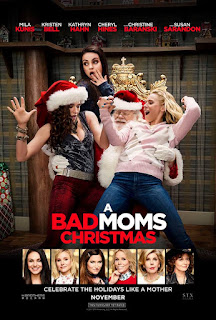 Everybody’s favorite moms are back in the follow-up to last year’s breakout comedy hit with A Bad Moms Christmas, now playing in theaters.

Under-appreciated and overburdened moms Amy (Mila Kunis), Kiki (Kristen Bell) and Carla (Kathryn Hahn) rebel against the challenges and expectations of the Super Bowl for moms: Christmas. As if creating the perfect holiday for their families isn't hard enough, they'll have to do it while hosting and entertaining their own respective mothers when they come to visit.

A Bad Moms Christmas reunites the sharp-witted star power of Kunis, Bell and Hahn with the clever writing and directing team of Jon Lucas and Scott Moore and gives the audience the same infectious attitude of satirical sympathy toward the age of helicopter mothering.

In this film, the moms decide to have a more relaxed, do-nothing holiday season but that’s not really enough to make an feature comedy. So, to make the film more interesting, you make it more about the relationships between the trio and their own imperfect moms, who all decided to show up the week before Christmas.

Christine Baranski steals the movie as Kunis’ control-freak, diva mother by putting sarcastic spins on lines like “It’s December 19th… even the Jews have Christmas trees by now and acts with such an impeccable sourpuss persona. Carla is still the group’s do-nothing type of girl, so it makes sense that they make her mother, Isis (Susan Sarandon), a reckless drifter dressed like a cowgirl who gets dropped off by truckers and immediately lights up a joint. Sarandon is perfect in her role as a sweet-souled-good-time petty outlaw. Now, Cheryl Hines comes into the picture as Kiki’s mom, Sandy, who has no boundaries and worships her daughter, She gets the same hairstyle, sneaks into Kiki’s bedroom to watch her, and hilariously buys the house next door. Hines is great in her role and is saintly kooky, and when Kiki starts to push back Sandy starts talking about having “heart cancer, stage 12.” Anyone who has a mom like this will have a rueful giggle at this. 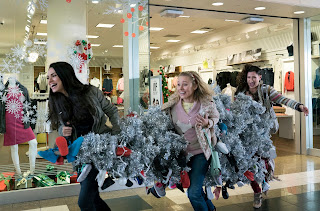 The mother-daughter battles in this film are lively in a cartoon way and have similar variations on the overbearing-mom comedies like Stepmom and Snatched. But A Bad Moms Christmas is able to stay fresh and hilarious.

Kathryn Hahn once again plays Carla and is just as hilarious as the first film. Hahn plays Carla as a trashy suburban girl who turns raunch into a second language and delivers the film’s comedic high points. She works at a spa giving Brazilian waxes which is where she meets Ty played by Justin Hartley. If you love watching Hartley on This is Us, then you are gonna love him in this film. He plays a male stripper and makes him smart, goofy, and romantic with moves that would rival Magic Mike.

If you loved Bad Moms, then you will enjoy the wild comedy that is A Bad Moms Christmas.