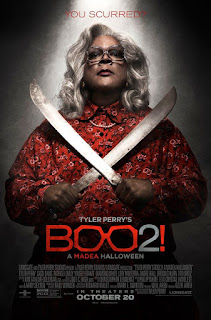 Tyler Perry and Madea return in the sequel to last year’s Boo! A Madea Halloween and gives us an edgier fright-night comedy spin on slasher movies with Boo!2 A Madea Halloween, now playing in theaters.

The story goes like this: On Tiffany’s (Diamond White) 18th birthday, she is determined once again to attend a frat party. And’ yes it’s the same frat house from the first film. The twist this time is that the fellas aren’t allowed to have a party in the house, so they decided to have it at Lake Derrick, which was the scene of a mass murder back in the 1970s. Getting those Friday the 13th vibes. In a mission to bring Tiffany home, Madea, Bam, Joe and Hattie must run for their lives when monsters, goblins and the boogeyman appear.

Diamond White returns as Tiffany, the rebellious teenager who is just annoy and constantly makes you want to slap her. White is great in her performance and the character has mellowed out a bit, but not much and is snottier and most 18-year-olds are. Tyler Perry reprises his role of Brian and the character has gotten much more passive since the first film. New to the film Taja V. Simpson, playing the role of Brian’s ex-wife and is even more frustrating as she constantly walks all over him and is way too passive with Tiffany.

And the senior citizens: two of them are played by Tyler Perry as he once again steps into the role of Madea and her brother Joe. It is always fun to see Perry cross-dressing into Madea and and her punch lines are just perfect and keeps you laughing. Cassi Davis character Bam and Perry’s Madea continue to bounce off each other with enjoyable results. And even when the two aren’t on screen together the film doesn’t lumber along.

The idea of seeing Perry’s rambunctious Madea taking on a Jason Voorhees-type killer is hysterical and then you add The Ring-type ghost girl in the mix and it just adds to the hysterics. Tyler Perry hasn’t been in the business of sequels, but this film does a good at being funny and satisfying. The scares aren’t meant to be scary, especially when you add Madea to them, which is fine because this is a movie that is supposed to make you laugh. The pacing of the film can become slow at some points which makes scenes drag on a bit, but the film is still enjoyable.

As with the director’s other films, “Boo 2!” ends with a moral lesson that everyone should pay attention too. So, if you are in the mood for something a little less scary this Halloween, go and see Boo!2 A Madea Halloween. 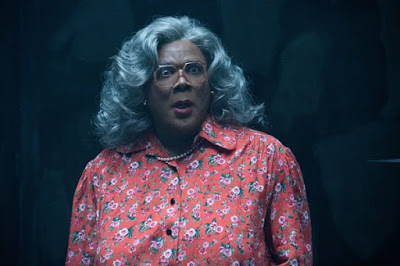