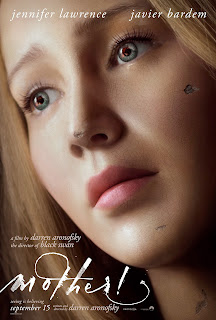 Director Darren Aronofsky’s new film starring Jennifer Lawrence will have you slipping down a rabbit hole of paranoia with Mother!, now playing in theaters.


The story goes like this: Jennifer Lawrence the young wife of an author of feel-good poetry, played by Javier Bardem, in the remote green countryside. Lawrence is busy trying to renovate their beautiful Victorian mansion that sits in the middle of nowhere, surrounded by nothing but trees and grass with no road, driveway and cell service. The house had burned in a fire that also took the life of Bardem’s first wife. Things start to get weird when a strange man and his wife, played by Ed Harris and Michelle Pfeiffer, show up and are invited to stay much to Lawrence's’ disapproval.
Jennifer Lawrence is outstanding in her role, but the role seems written so thin that Lawrence has to give it everything she has and infuse the character with her own personality just to create any depth to the character. Lawrence pretty much holds the whole film together. Javier Bardem good in his role but the character is pretty boring and the whole time I was watching him I kept asking myself “What is wrong with him?”
When Ed Harris shows up, within minutes Harris and Bardem are sitting around like old drinking buddies. When Bardem invites him to stay, Lawrence reasonably says, “He’s a stranger. We’re not going to let him stay over.” The fact that Bardem treats these stranger like family and Lawrence like crap is strange and doesn’t make any sense. The chemistry between Lawrence and Bardem is not that convincing until the ending, but that’s mostly because he treats her like more like someone he is sick of then someone he loves. 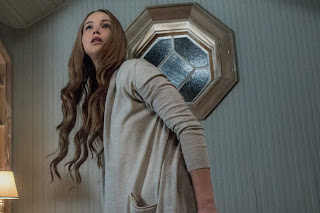 Ed Harris and Michelle Pfeiffer are great but do absolutely nothing for the plot. The trailers made it look like their characters were the villains of the movie, which is not the case. They really only add to Lawrence’s state of mind causing her to hallucination things like her flushing a heart down the toilet. She does take a mysterious golden elixir, which could possibly have hea-altering properties. As soon as she stops taking it, the madness gets even worse.
Mother! feels like a nightmare hallucination played out in a video game that seems to descend, level by level, to more intense madness. Director Aronofsky seems to be getting inspiration from The Shining (with the isolate setting and Bardem’s story) and mixing it with a bit of Rosemary’s Baby, probably one of the best of all paranoid horror films. With that being said, he dives head first with the film’s in-you-face, cult final scene, which probably the best part of the film besides Lawrence. That movie was a nightmare vision of pregnancy in which Rosemary paid the price for her trust and naivete. But what, exactly, is the sin Lawrence is paying for. She is trying to restore her home to what is was, is that seriously a crime? The pacing of the film leading to that final scene was so slow with absolutely nothing happening to make it more interesting. 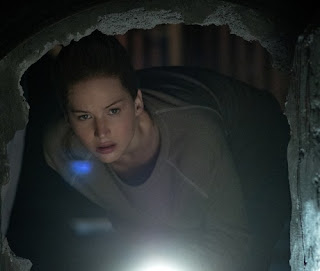 Despite it flaws, the film’s horrors plays off everything from the grabby hordes of celebrity culture to what it’s like to be a mother (complete with the world’s most ironic exclamation point). Throw in a twist ending that would make M. Night Shyamalan proud, and you have got yourself a head-trip horror movie.