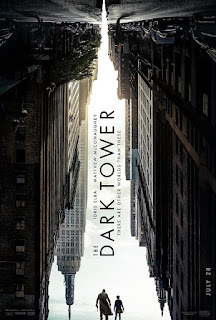 I've never read any of the books that create The Dark Tower series. I went into this movie knowing nothing about it, but the trailers had me intrigued, and you can’t go wrong with Matthew McConaughey and Idris Elba.

The film begins by introducing us to Jack Chambers (Tom Taylor), a young boy with unique visions of a Man in Black, a man who knows his way around a gun, disturbing creatures who wear human skin, and a looming dark tower being attacked by a machine that uses the drained energy from kidnapped kids.

Vikings’ star Katheryn Winnick plays Jack’s mother who tries her best to be understanding. Taylor is great in the role of Jack, creating a strong, resourceful, and sometimes naive character who gets caught up in all the madness thanks to his visions. Taylor mostly interacts with Idris Elba throughout the majority of the film and their chemistry gives the film most of its comical and heartfelt moments.

No one does villainy quite like McConaughey as he takes on the role of Walter, better known as the Man in Black.

To see the rest of my review go to FINE Magazine