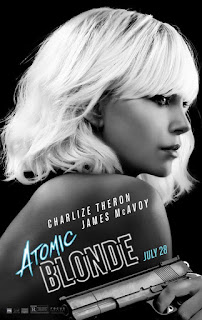 Charlize Theron fights and shoots her way through a well-choreographed, yet slow-paced, action movie Atomic Blonde, now playing in theaters.

The story goes like this: MI6 agent Lorraine Broughton (Charlize Theron) is sent to Berlin on the eve that Communism ends, going back and forth from West and East Germany, to recover an important asset and find a deadly double agent.

Atomic Blonde wonderfully showcases Theron’s talents, making her the center of epic throwdowns with various KGB goons. The action in Atomic Blonde, however, is pretty much the only exciting part of the film. The incredible stunts speak for themselves as the camera beautifully goes under and over and around the hand-to-hand combat.

The pacing and the plot are the two biggest concerns for me. For most of the film, I couldn’t tell what was going on. Atomic Blonde mostly deals with the toll espionage can have on identity which is reflected in the chaos that is Berlin. The film has so many characters––even though that’s supposed to help, it just makes things more confusing. Plus, the film goes back and forth with Charlize Theron's character being interrogated by John Goodman and Toby Jones, which didn’t help move the film along.

Though Sofia Boutella’s character, Delphine, does help to make a really steamy scene in the film, and the chemistry between Theron and James McAvoy worked well. 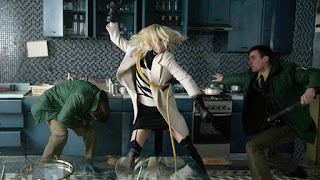 However, the slow-paced plot is forgiven with the exciting action and excellent performances by the cast. McAvoy’s work in Split seemed to help him in this movie, making his character a delightful maniac. And by the time Atomic Blonde is over with an epic showdown in a hotel, it’s easy to overlook its brutal charms.