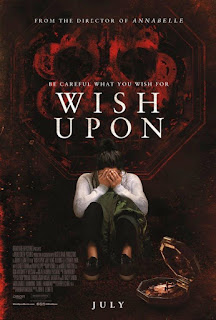 In the horror genre films, more than likely you will see the same narrative over and over until the movie becomes so predictable you can figure out the ending before the movie even starts. Sometimes, you get that rare film that throws a curveball. That is exactly what Wish Upon, now playing in theaters, does.

The story goes like this: Claire (Joey King) finds a strange box that will grant her 7 wishes. Embarrassed by her dumpster-diving hoarder father (Ryan Phillippe), bullied by the high school meanie, and traumatized by her mother’s suicide years earlier, Claire wished only to be rich, popular, and adored by her high school crush.


Directed by John R. Leonetti, Wish Upon does a decent job at making you jump rather than gag. The scares are placed cautiously and wittily as the story moves at a good pace from wish to wish, and the costs of these wishes paid with the help of some familiar faces (like the lovely Sherilyn Fenn as Clare’s surrogate mother). Taking a page out of the horror film The Possession, this film dives deep on the bruise of a broken home that helps the audience understand Claire’s addiction to the magically and deadly Chinese music box. The script, written by Barbara Marshall, does a great job cutting corners that doesn’t serve its bond with Claire’s emotions. 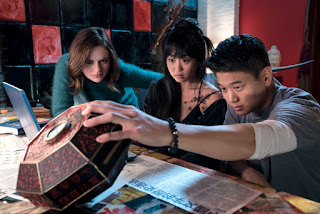 irritating. But that shows how crazy and dependent a person can get as their obsession grows. Ki Hong Lee is great in his role as skater boy Ryan and serves as the film's dispenser of ancient lore (which comes complete with a “crazy wall” collection of newspaper clippings). Claire’s two best friends are play by Stranger Things scene-stealer Shannon Purser and The Walking Dead’s Sydney Park. Park plays her role with the right amount of sass, and Purser is much like her character Barb from Stranger Things as the film's rational thinker.

The design of the music box is unique and quite possibly could launch a franchise, much like the creepy porcelain doll in Annabelle. Wish Upon is skillful at being that satisfying slice of supernatural escapism, and films like this showcase what the horror genre has been built upon.
Published at FINE Magazine