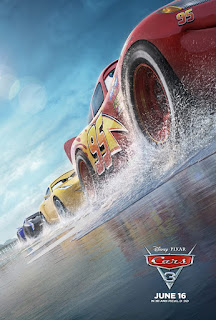 The third installment in the Cars franchise, now playing in theaters, takes the series back to its sports/racing roots after taking on the spy movie genre in the second film.
The Cars films never disappoint when it comes to the quality of animation, and Cars 3 is no exception. The designs of the various vehicles reflective surfaces and expressive mobility have never been more convincing. The racing sequences in this film are even more visually stunning thanks to the amazing team at Pixar Animation Studios.
The story of Cars 3 takes audiences back to that mentor/mentee sports story that started in the first Cars film. Lightning McQueen (Owen Wilson) is now the more experienced racer. Cars 3 honors the late Paul Newman in such a remarkable way. They explore Doc’s impact on Lightning and their experiences start to parallel each other, which are truly the most memorable and heartfelt moments in the film.
Cars 3 still manages to blend that kid-friendly humor and sports lingo of the previous Cars movies and achieves a film that is perfect for all ages. The introduction of Cruz Ramirez (Cristela Alonzo) as a spastic go-getter and Lightning’s new mentee throughout the film is great, as she could carry on the franchise if Disney/Pixar decide to move forward with future films. The emotional arcs between Lightning and Cruz are compelling, and they are shared equally. 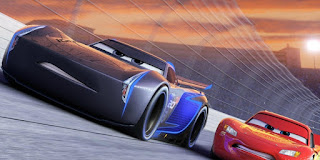 The familiar inhabitants of Radiator Springs like Mater (Larry the Cable Guy) and Sally (Bonnie Hunt) make a playful return. Nathan Fillion (Sterling, McQueen’s new charismatic sponsor) and Kerry Washington (Natalie Certain, the film’s race statistical analysis) don’t get a lot of screen time, but that doesn’t affect the way their performances give their characters more personality. And Armie Hammer’s Jackson Storm develops as both a two-dimensional jerk as well as an obstacle to foil Cruz and Lightning throughout the film.


All in all, Cars 3 is a family-friendly movie that doesn’t disappoint. Fans who loved the original Cars, will appreciate the mix of heart, humor, and amazing animation. Cars 3 offers more of the heartfelt storytelling from the original and raises the bar for the Cars franchise.