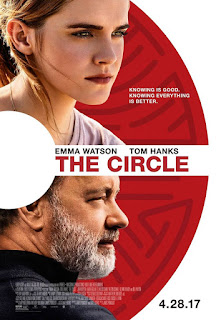 In a world that is constantly concerned about their personal privacy and connectivity, films and television series love to explore that tug-of-war game between the two. With shows like Person of Interest and Mr. Robot, they show us the danger that technology can lead too, especially in the wrong hands. The Circle, now playing in theaters, is an effective film with its extreme message and incredible cast performances is sure to be a real eye-opener.

Adapted from Dave Eggers’ 2013 novel The Circle stars Emma Watson (Beauty and the Beast) as a major tech company’s new employee. The company has raised the bar of social networking to a whole new level, surpassing Facebook or Google. The company, called The Circle, is led by its charming founder Eamon Balley, played by the incredible Tom Hanks, and Tom Stenton (Patton Oswalt) his business partner. Emma Watson’s character Mae Holland quickly climbs the corporate ladder after she goes viral when she uses the company’s cool-looking tech and she is pushed into limelight.

As the film progresses, Mae’s intention to go above and beyond and commit to the company’s vision of an always-on and always-connected world comes with risks.


For the full review go to http://www.finehomesandliving.com/Emma-Watson-and-Tom-Hanks-in-The-Circle-Review/