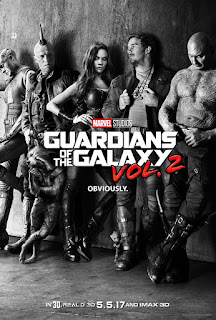 The Guardians of the Galaxy are back and the sequel is just as fun and adventurous as the first. It’s very different from it’s predecessor, but everyone gives their A game, especially its writer/director James Gunn. This ragtag bunch of fighters are led by Peter Quill, played by the brilliant Chris Pratt, who is cheery as he is roguish who calls himself Star Lord.
It can be tough these days to be a hitmaker, but Gunn does an amazing job keeping things fun and action-packed, starting with an opener with big bangs and slapstick humor. The movie starts with Quill and the team fighting an ugly blobby opponent with fat, snapping tentacles and rows of nasty teeth. The Guardians each take turns smacking the blob around, jumping and thrashing about a digital environment that's really cool and intergalactic.
These introduction are usually chaotic, especially for most blockbusters. It's a way to reintroduce characters, their skills and traits and Quill’s team make for some amusing company. Gunn doesn’t hold back when it comes to developing the romance between Gamora (Zoe Saldana) and Peter that started in the first film. Hopefully we will get to see more of this in the next installment.
We get to see more of the Guardians’ personal stories and the theme that is common throughout the film is family, it’s like they are taking a page out of the Fast and Furious series. This is seen mainly the test, and at some times violent interactions between Gamora and her sister Nebula (Karen Gillan) who wants payback for their rotten childhood.

For the full review go to http://www.finehomesandliving.com/Guardians-of-the-Galaxy-Vol-2-Movie-Review/