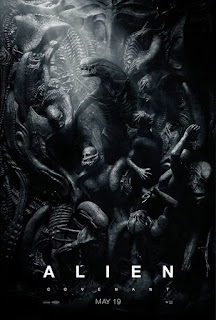 It has been seven years since Ridley Scott conjured up a nightmarish worst-case scenario of life that could be awaiting us out there in space. The last film, Prometheus, gave us the origin of the Alien franchise; now, in Alien: Covenant, currently playing in theaters, audiences get a pleasant and enjoyable return to the beloved franchise with hard R-rated horror, ferocious acid-dripping creatures, and a tough female lead.

In an effort to please Alien fans, Scott returns to the franchise and delivers a decent, but enjoyable film with gory death sequences as the crew gets terrorized by these creatures. After so many films though, there isn’t much that will surprise the audience, especially when it comes to how these creatures reproduce (whether it’s by microscopic spores or the always enjoyable disgusting face-hugging). It’s frustrating, watching these characters not understand the rules of the genre: humans never come back from an encounter like this, and once you come into contact with the virus, you are done.

To view my full review go to FINE Magazine