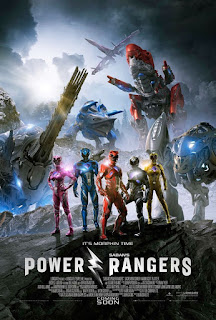 Five ordinary teens must become something extraordinary when they learn that their small town of Angel Grove - and the world - is on the verge of being obliterated by an alien threat. Chosen by destiny, our heroes quickly discover they are the only ones who can save the planet. But to do so, they will have to overcome their real-life issues and before it's too late, band together as the Power Rangers.

This brand new version creatively reboots the Power Ranger's’ origin story by making them a team of intergalactic warriors, which definitely leaves room for future stories. Even with all of the memorable teen action-adventure movies having solidified their band of loyal followers over the last two decades, this revived Power Rangers franchise is sure to sustain a full-fledged following of its very own.

For long time fans, this new version of the Power Rangers preserves the most iconic and beloved characteristics that made us fall in love with the original franchise, updated to show technological advances. The Rangers new suits look more like armor than a superhero costume and their robotic assault vehicles known as Zords that they take into battle have a more enhanced battle capabilities. Rita’s menacing sidekicks the Putties and her gigantic warrior Goldar get a more polished, CGI look that is amazing. (And yes, the “Go Go Power Rangers” anthem makes a delightful return.)

Screenwriter John Gatins is triumphant in effectively creating a new Power Rangers mythology into a much more manageable range and reduces the campy humor and martial arts fixations that characterized the TV series and feature films. This revamped version instead chooses to emphasize more realistic dramatic situations by giving each of the Rangers some form of personal and relatable issue.

These teens become more three-dimensional than their predecessor, whether it’s bullies, alienation or sexual orientation. Added timed humor, whether it’s aimed at Billy’s tech obsessions or Zordon’s sarcastically judgmental attitude toward these teens, helps reduce the self-consciously jokey tone of its earlier films.

With an incredible cast of young talent, RJ Cyler gives an amazing and heartfelt performance as Billy, balancing Billy’s obsessive and creative tendencies, playing them against one another creating the perfect blend of humor and emotional impact. Bryan Cranston as Zordon and Bill Hader as the optimistic Alpha 5 form a resourceful and comedic team, but it’s Elizabeth Banks as Rita Repulsa who steals the show with her sheer campiness (even when she is completely unrecognizable under all that makeup and prosthetics).