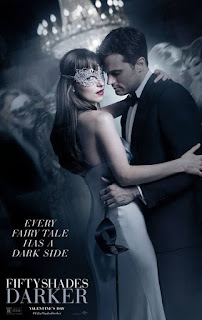 Jamie Dornan and Dakota Johnson return in the steamy sequel to the 2015 box office hit based on the popular book series by E.L. James, Fifty Shades Darker, in theaters now.

When a wounded Christian Grey (Jamie Dornan) tries to entice a cautious Anastasia Steele (Dakota Johnson) back into his life, she demands a new arrangement before she will give him another chance. As the two begin to build trust and find stability, shadowy figures from Christian's past start to circle them, determined to destroy their hopes for a future together.

Fifty Shades Darker is another one of those films that follow the current Hollywood trend with sequels of introducing different genre to make it more interesting than it’s predecessor With this film, it turns into a psychological thriller. Director James Foley does a great job at doing this as he is well crafted in the art of dramatic thriller storytelling. His efforts to raise the bar for this particular franchise for quality proves better than those of Sam Taylor-Johnson who helmed the first film. Fifty Shades Darker exceeds its predecessor in so many ways.

Fifty Shades Darker also surpasses the first film with its sex sequences, giving them a more comfortable and brisk sense of pacing as well with its dramatic scenes. Foley and his cinematographer John Schwartzman film these sequences in a visually unique and radical approach, and in turn, more interesting fashion. This scenes also benefit great from the film’s two leads as them seem more comfortable with them and are more creatively put together.

Dakota Johnson does a great job at giving Anastasia Steele a charismatic and compelling presence while also keeping the character’s personality and quirkiness alive. Most of the films funniest moments are due to Johnson’s, as she plays up to Ana’s quick responses to the strange and/or threatening behavior of things surrounding her. Jamie Dornan does not struggle in giving depth to the two-dimensional character that is Christian Grey, and in fact gives him more depth. Dornan is fantastic at handling the Christian’s light-hearted and vulnerable moments as well as his dramatic scenes. For example, when Christian is reflecting on his troubled past. Johnson and Dornan’s romantic chemistry is much improved as they look more comfortable with each other, both in their roles and opposite each other.

New to the Fifty Shades franchise are Eric Johnson and Kim Basinger as they play the “villains” of the film in the forms of Ana’s slimy and creepy boss Jacy Hyde, and Christian’s ex-lover Elena Lincoln (or as Ana refers to her as Ms. Robinson). Bella Heathcote joins as Christian’s past submissive Leila, functioning more of a plot device but still offers an interesting insight into Christian’s past. Returning cast members are Marcia Gay Harden, Luke Grimes and Eloise Mumford offering to a handful of scenes where their presences is necessary (especially Harden) but are pushed into the background once again.

Fifty Shades Darker is better and has more enjoyable moments thanks to the cast’s performance or the choices the director made, and with a much better script. And with a post credit teaser for the next year’s Fifty Shades Freed, there is enough to keep this film series going towards the finish line, especially with the fanbases’ support alone.