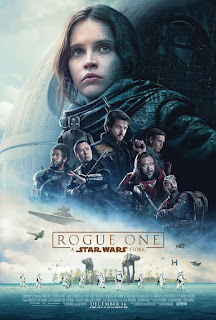 Director Gareth Edwards takes us back to a galaxy far, far away in a well-crafted story that provides the perfect blend of action and classic Star Wars style with Rogue One, now playing in theaters.

Former scientist Galen Erso lives on a farm with his wife and young daughter Jyn. His peaceful existence comes crashing down when the evil Orson Krennic takes him away from his beloved family. Many years later, Galen is now the Empire's lead engineer for the most powerful weapon in the galaxy, the Death Star. Knowing that her father holds the key to its destruction, a vengeful Jyn joins forces with a spy and other resistance fighters to steal the space station's plans for the Rebel Alliance.

Not only does Rogue One blend well with A New Hope, but now we know why the Death Star had that big weakness, or Achilles heel to be more literate, and how that information fell into the hands of Princess Leia. There are no Ewoks or Jar Jar Binks-like, thank the galaxy, characters here and the plot plays out more like a war movie and less like a flashy video game.

Felicity Jones is perfect in her role as the courageous, fugitive rebel Jyn Erso who just so happens to be the daughter of the man behind the plans for the Death Star. Jones is now in league with fellow Star Wars female leads Carrie Fisher and Daisy Ridley, well-born but determined, with a sense of purpose. The comedy robot this time around is K-2SO, a reprogrammed Empire droid, voiced by Alan Tudyk, who has a funny way of objecting to orders and delivers perfectly timed punchlines.

Rogue One is full of Easter Eggs to other films in the franchise, which is perfect for faithful fans. If there is anything that is new in Rogue One, it's the fact that we see more of an importance to the Death Star’s nuclear effect. In previous films, we have seen this weapon blow up planets,and the disaster was almost ideal; but now a prototype is blowing up cities. The suggested comparison arguably makes light of a serious subject, but there is a teary-eyed feeling with which Rogue One deploys this catastrophe, and portrays the sacrifice needed to prevent it. This is another really entertaining fantasy with fan-fiction energy and attack.

There are also some really exciting cameos from much-loved personae, involving next-level digital effects, so that watching feels like going into a time machine at various stages, back to the 80s and 70s.


Rogue One is a pop culture event must like The Force Awakens, and part of its charm is in the eerie, almost dreamlike effect of continually using familiar elements, restructured and reconfigured, and reaching back into the past and hinting at a destined future.