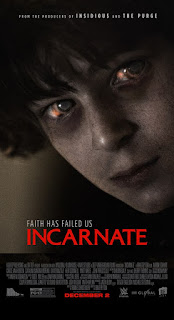 Faith has failed us is the theme in the new horror film Incarnate, from the producers of The Purge and Insidious, now playing in theaters.

An unconventional exorcist (Aaron Eckhart) must use his psychic abilities to do battle with a malevolent demon that has taken over an innocent 11-year-old boy (David Mazouz). But he discovers he's up against a more formidable foe than he anticipated when it's revealed that the same malicious entity previously murdered his wife and child. Now, he's in a race against time to defeat his worst enemy before it unleashes its wrath upon the entire world.

When it comes to films that center around a demonic possession, the devil isn’t the only thing that is in the details. It helps greatly when filmmakers are able to take a different approach while still covering familiar territory, and it also helps a lot when you can find a fantastic actor to commit to the lead role. Incarnate is the latest film from the Blumhouse house of horrors, and the film offers a fresh take on a standard exorcism, along with amazing performances from Aaron Eckhart (The Dark Knight) and David Mazouz (Gotham) make it more persuasive to keep interest.

Eckhart is fantastic in the role of Dr. Seth Ember, a scruffy, wheelchair expeller of demonic spirits who states that he performs “evictions” and not exorcism, and unlike many in his field doesn’t clock with the Vatican. Although, when traditional exorcism don’t work, the Catholic Church requests his help as a subcontractor to beat the evil.

Using the methodology of Inception, Ember aids those who are unfortunately demonically possessed by “diving” into their dreams, where they are living in their most deepest desires created by the demon. Director Brad Peyton and screenwriter Ronnie Christensen do a great job at establishing the ground rules for this trick, spelling out non spiritual limitations and escape route necessities on the fly, and neatly tucking backstory into Ember’s dialogue exchanges between his two dedicated assistants (Keir O’Donnell and Emily Jackson). David Mazouz does a great job as he does double duty by playing both an innocent kid and demonically possessed. Mazouz does a very believable performance when his character becomes possessed just by how evil he looks when he stares and smiles at the camera.

The battle between relatively good and unspeakably evil between Eckhart and Mazouz unfolds throughout the dream world location’s, a sunlit city park and a carnival midway, that provide effective visual differences to the usual exorcism movie images of levitating, contorted bodies and inky-black eyes of demons. Eckhart spends much of the film looking like a homeless man with a I-don’t-give-a-damn vibe which fits perfectly for his character who would rather seek revenge then help those in need.


Even at its short, 79 minute run time, Incarnate does a great job at not running over plot holes that most horror films occasionally do. The film is a solid piece of originality that will satisfy gene aficionados.