Fantastic Beast and Where To Find Them Review 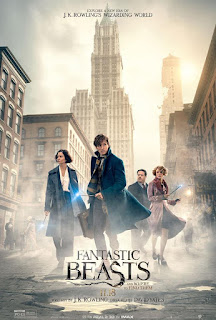 Once again audiences get to step into the wizarding world, this time before Harry Potter, in the brand new film from author J.K. Rowling, Fantastic Beasts and Where To Find Them in theaters now.

The year is 1926, and Newt Scamander (Eddie Redmayne) has just completed a global excursion to find and document an extraordinary array of magical creatures. Arriving in New York for a brief stopover, he might have come and gone without incident, were it not for a No-Maj (American for Muggle) named Jacob, a misplaced magical case, and the escape of some of Newt's fantastic beasts, which could spell trouble for both the wizarding and No-Maj worlds.

Academy Award winning Eddie Redmayne (The Danish Girl) is perfect in the role of protagonist Newt Scamander, putting his skills to good use and brings audiences a convincing, compelling and quirky hero. This film is a great introduction to Scamander as we will learn more about him and his adventures over the course of the five films the studio has planned. But the balance between what we know about him by the end of the film and the secrets we still have to uncover feels satisfying.

Fantastic Beasts is inspired by a textbook used by the students of Hogwarts School in the original films. A printed version of the textbook was published back in 2001, and by using the textbook format for the book, which didn’t offer much in the way of narrative, made the plot of the Fantastic Beasts movie essentially an original story. This lack of well-defined source material works in the film’s favor, as Fantastic Beasts doles out quite a few clever plot twists that pull you deeper into its magical world in much the same way the Harry Potter films did. And the opportunity to experience those unexpected twists and turns unspoiled makes you appreciate Rowling’s talent that much more.

However, some of the best performances in Fantastic Beasts come from the film’s supporting cast. As the magically unaware factory worker who finds himself caught up in Scamander’s wild adventure, actor Dan Fogler wonderfully excelled in a role that could’ve easily been a forgettable one. Fogler’s character evolves and adds more layers as he’s drawn further into the magical world, making him more interesting than magic-wielding characters that surround him.

Both Katherine Waterston and Alison Sudol also give memorable roles among all of the spectacle, with Waterston playing an office worker for the Magical Congress of the United States of America (MACUSA) who aspires to do more, and Sudol playing the mind-reading, everso cheery sister of Waterston’s character. Sudol in particular is a joy to watch whenever she’s on the screen, and her performance rises up what could have been a bubbly airhead role into a character with a surprising amount of depth.

The villains of Fantastic Beasts really serve the story well and provide the perfect level of menace for the first installment of a multi-film arc. The actors who portray them all seem to enjoy the colorful roles they play, and that translates to some entertaining performances, particularly Colin Farrell’s portrayal of Percival Graves. Beyond the performances of the human cast, it’s really the magical creatures of Fantastic Beasts that really steal the show, no surprise there.

Fantastic Beasts features a much larger stable of magical creatures of all shapes and sizes than any single Harry Potter movie (and possibly the entirety of the original series).

Redmayne’s Scamander wields a decidedly different arsenal in the form of various weird, wonderfully unique fauna. Although he is handy with a wand, Scamander’s true talent lies in knowing just the right magical beast to call upon and how to deal with every sort of magical beast) in any situation.

And fittingly, the creatures he calls upon or interacts with truly are some of the most fantastic beasts we’ve seen so far in Rowling’s magical world. The attention to detail on the creatures of Fantastic Beasts truly shows how much thought the creative team had into each and every resident of Scamander’s magical wildlife refuge, and avoided the easy path of “insert magical creature here” story development.

This film truly shows how much Rowling’s cares about this world as she is a first-time screenwriter on this film, plus she had the amazing talents of director David Yates who helmed the last four Harry Potter films. Yate’s return to the wizarding world is an excellent example of how to bring audiences back to a world they love without reusing old material.

Fantastic Beasts and Where to Find Them manages to be both a successful, compelling prequel and a perfect extension of the universe that was introduced years ago.

A talented cast with an exciting story, and a filmmaker with a talent for bringing cinematic magic to life all play into the success of what unfolds on the screen, and proves that Fantastic Beasts lives up to the promise of its title.