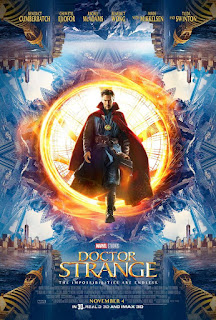 Marvel’s 14th Cinematic Universe movie is a brain-melting tale that reinvigorates the genre with Doctor Strange, in theaters now.

Dr. Stephen Strange's (Benedict Cumberbatch) life changes after a car accident robs him of the use of his hands. When traditional medicine fails him, he looks for healing, and hope, in a mysterious enclave. He quickly learns that the enclave is at the front line of a battle against unseen dark forces bent on destroying reality. Before long, Strange is forced to choose between his life of fortune and status or leave it all behind to defend the world as the most powerful sorcerer in existence.

Benedict Cumberbatch is just perfect in the title role, as he is just as strong and sharp as the surgical tools he uses. When we first meet him, he has that same privileged swagger of Tony Stark (IronMan). But Cumberbatch is quickly able to make the immediately least likable Marvel heroes into the most unpredictable and intriguing.

Tilda Swinton is amazing as the Ancient One, Strange’s mentor in the arts of magic. An unworldly teacher with a touch of very earthly cruelty, there’s authority to her screen presence that gives weight to Strange’s spiritual journey. Strong support from Chiwetel Ejiofor as Mordo and Benedict Wong as Wong brings heart and humour to the story.

Marvel’s Doctor Strange is visually stunning and has something of the enchantment of the Harry Potter series. The unity of the performances is a required force as we dive into the mind-bending layers of trippy visuals. This is one film that viewers watching it in 2D instead of 3D will missing out on. Not only does the fantasy element pop out of the screen, the teeming chaos of Nepal looks phenomenal.

Two end-credit stings give a hint of things to come on our next appointment with the Doctor, suggesting that Marvel fully appreciates the invigorating transfusion of new blood that this film provides.