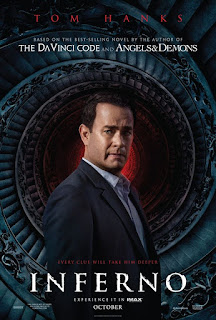 Tom Hanks is back as Robert Langdon in Inferno, the third adaptation of Dan Brown’s bestselling novels, now playing in theaters.


Famous symbologist Robert Langdon (Tom Hanks) follows a trail of clues tied to Dante, the great medieval poet. When Langdon wakes up in an Italian hospital with amnesia, he teams up with Sienna Brooks (Felicity Jones), a doctor he hopes will help him recover his memories. Together, they race across Europe and against the clock to stop a madman (Ben Foster) from unleashing a virus that could wipe out half of the world's population.

Tom Hanks is perfect in his role and puts as much effort and commitment into playing Langdon as he does when when he plays real life people like the heroic pilot Sully Sullenberger in his last film Sully. The talented Felicity Jones fantastically brings her own dramatic chops to her scenes with Hanks, which makes their relationship get more interesting as the films goes on. It was really nice to see them bring one of Langdon’s former love interests, played by the amazing Sidse Babett Knudsen, who is now the head of The World Health Organization (W.HO.) in pursuit of the Inferno virus before it is unleashed to the world. And having those few romantic between Hanks and Knudsen does wonders to help humanize the usually befuddled Langdon.

Director Ron Howard does a great job setting up the film’s pace like a puzzle, making the audience to to piece every clue together as the chase intensifies. The way he puts Langdon’s bizarre visions together are is just really cool to see, especially with the special effects put into them. The interesting twists and turns as the mystery unfold add greatly to Langdon’s latest adventure.

Just like Hanks and Howard’s previous Dan Brown adaptations, Inferno has lots of thrills that will keep audience’s interested and curious in solving the mystery.